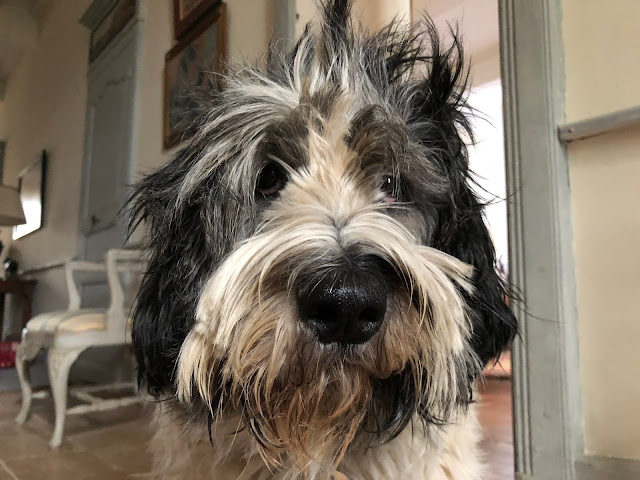 Monday morning. A vision of loveliness attaches herself to my ankles as I go round the house opening up the shutters. Sophie has decided that today is best started on a foundation of ear scrunches and tickles. 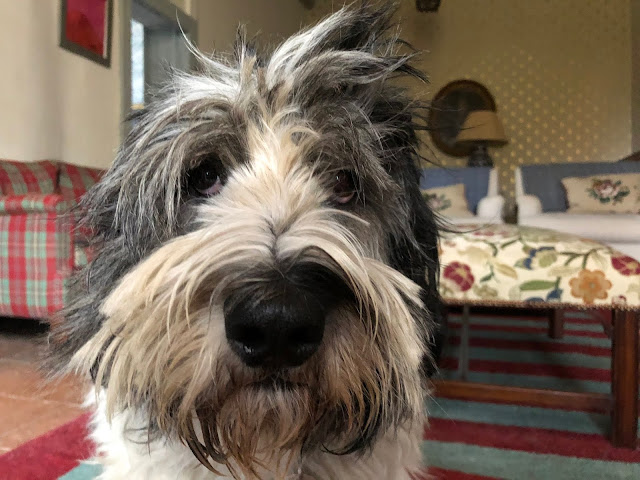 To the florist to buy some flowers. The florists is run by a mother and her two daughters. They have a thing for pink. They are not particularly interested in their customers. While I pay for some freesias they maintain a spirited conversation among themselves. The younger of the two daughters is thinking of moving in with her boyfriend. Neither mother or elder sister approve. The credit card is handed over and returned without any acknowledgment of my presence. 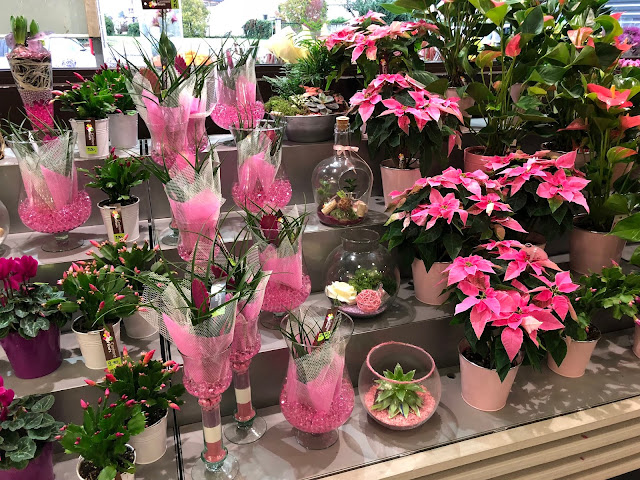 The bakers has reverted to a Monday morning sobriety. 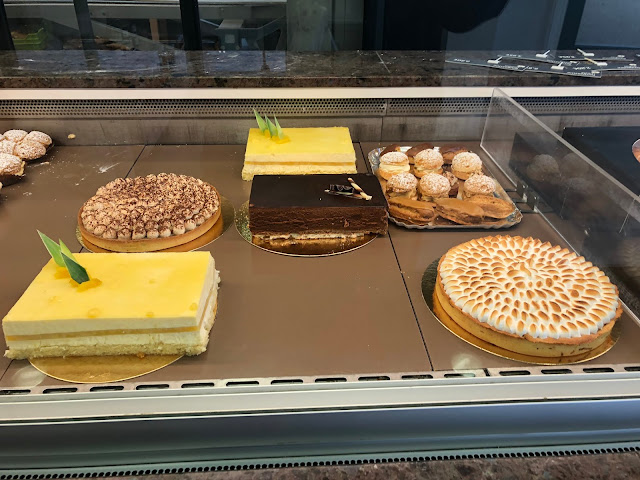 Time to pick up two pineapples in the greengrocers. They come from La Reunion so therefore class as French. When did pineapples start to cost $10 apiece ? 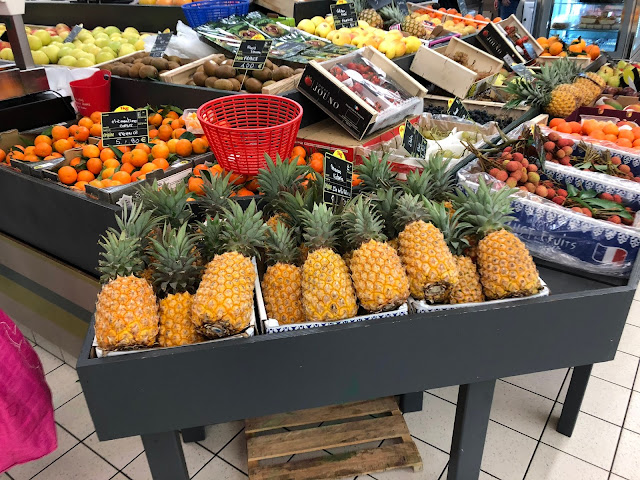 Some steak for dinner. 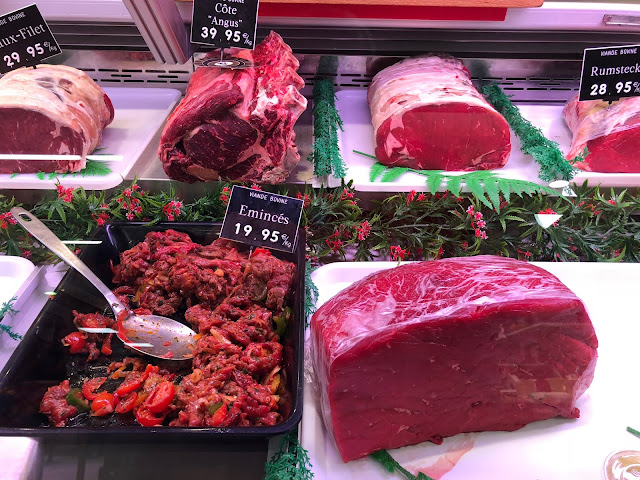 The conversation in the cafe is the continuing wave of demonstrations. Tear gas was used again at our local motorway pay station over the weekend. The pay booths were set alight. There is talk of establishing a state of emergency although the thought of armed troops facing off with our local demonstrators doesn't fill me with joy. The poor shop keepers are having a very quiet Christmas. No one seems to know what the demonstrators want. They are now referred to on the news broadcasts as sans-dents - the great unwashed. 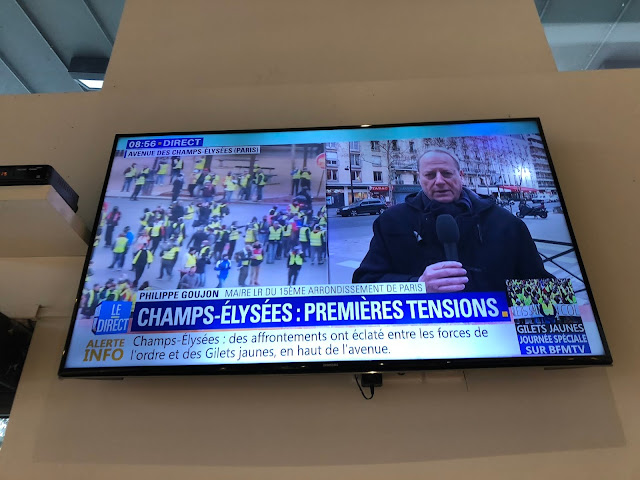 They played this on the radio this morning. There's something of a more innocent age about it which made me smile : https://youtu.be/-I_T3XvzPaM 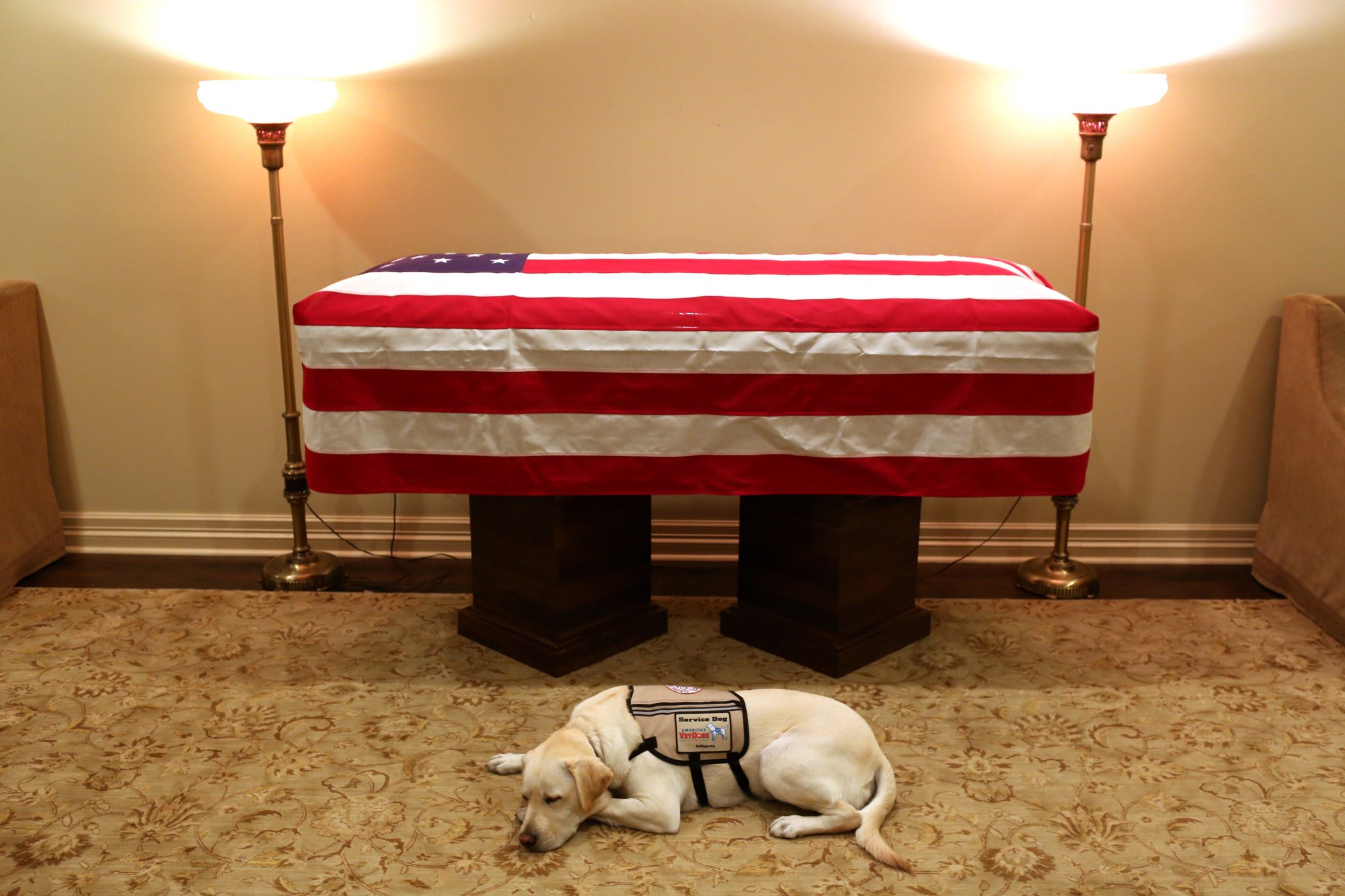 Huh - I am eating pineapple as I read this. Ours are $3 NZ which is about $1.50. I guess it is the season though, so they are pretty cheap. I must say that the florist is as uninspiring as the bakers. Poor customer service seems to be a common thing for you in France. Such a shame as I have such a romantic view of living in France.

The violent protests have France have even forced their way into the Brexit dominated UK media consciousness. The situation looks bad, and surely referring to the demonstrators as the great unwashed will not help...
Wishing you all a peaceful week at the ROF.

Pineapple makes me think of my stint in Africa, and then you give us a song that came out while I lived there and that I played again and again (on a bootleg cassette, played on a battery-operated boombox, since I had no electricity). A real sentimental journey.
There is quite a sentiment that the autoroute should not have tolls, although everybody seems to forget that without tolls it would be full of potholes and even more crowded, including with slow vehicles.
I've managed to avoid contact with les sans-dents so far and hope to keep it that way. They are concentrated at a few key intersections, and it's worth the detour. However, the city center was eerily quiet Saturday as most people just stayed home, again.

Sure, the florist is unwelcoming but when service here is charming ... it is charming like nowhere else.

Life at The Rickety Old Farmhouse remains untroubled by tear gas and rioters. There again who would dare trifle with two ferocious PONs ?

We seem to live in a particularly militant part of the country. 'The Font' thinks it may have something to do with the local farmers having time on their hands and entering into the protests. The local hunters went off to picket the motorway yesterday. The thought of armed hunters versus the CRS is not one to dwell on.

Just to note the premium price of the beef 'Angus' !

And it was the real thing from Aberdeenshire. The fact it's the only foreign product in the butchers says something.

I suppose the choices of the younger daughter perhaps making a mistake could take priority over customer service.

You asked on my post if Todd's "compliance with my wishes" was correct about him. He does do as I ask, and it does help if a treat is involved.

I did not realize that the last photo was of President Bush's service dog Sully, who will be traveling here to Washington today.

Pineapples here are about $2.00, give or take.
I've read that the service dog, post-funeral, will have a vacation, then be re-assigned to another veteran, via the Walter Reed Army Hospital. I wish his presence had been publicized earlier, because it could have been a good teaching tool for the public re service animals.

During my visit to the White House, I recall our docent telling us Abraham Lincoln had lied in state in the East Room. A young boy in front of me went to a security guard and asked what lied in state meant. Tears came to my eyes as that security guard knelt down, to be eye level with the young boy, and found the words that he would understand, to explain what lie in state means. May love and peace surrounded the Bush Family, as President Bush returns to Washington and the White House.

Thank you. You're quite right and my apologies. I should have linked the photo of Sully to this link : https://www.vetdogs.org/AV/Contribution/sully.aspx