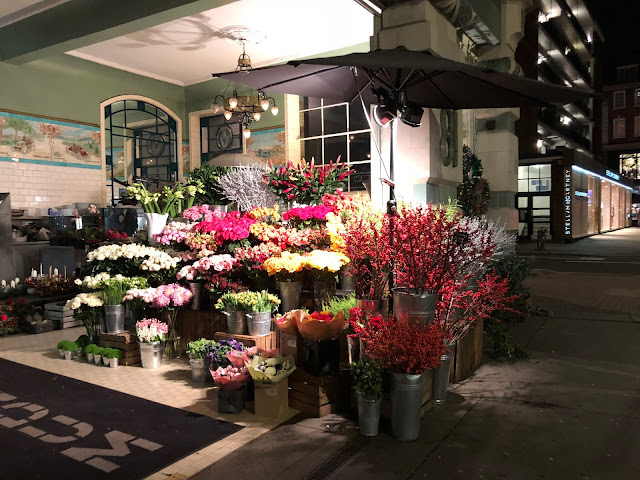 Gone are the days of visas being issued overnight. Starting this week there are new regulations which require fingerprints to be taken and a full list of  previous visits to be written down in exhaustive detail. Background checks require at least four full working days. The trip is delayed until the New Year. Angus quietly curses the visa agency for not having found this out sooner.

There are seats on the first flight back to Toulouse. At 5 in the morning London is quiet but the flower stall is ready for business. Who buys flowers at 5 am ?

At the airport a young lady is unpacking a large cardboard box containing the hire car company's Christmas decoration. '' It's a sheep with horns " she tells her colleague as what appears to be a quarter size albino reindeer emerges from the packaging. Angus refrains from pointing out that a sheep with horns would be a ram. What she's holding would appear to be that rarest of beasts - a sheep with antlers. The young lady toys with putting it on her desk. It proves too big. She finally opts for a position on the ground as far away from her as possible. 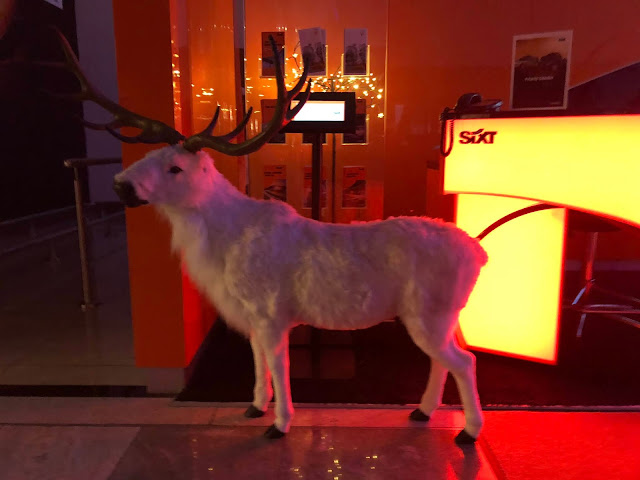 The sandwich shop in the departure terminal is doing a roaring trade. The staff all seem rather jolly. Some are in red Santa hats. Others in head scarves. Very cosmopolitan. 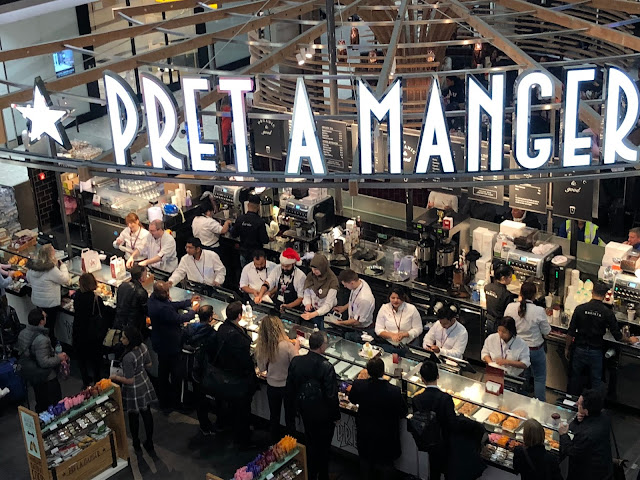 In the airline lounge guilt ridden parents on business trips have the chance to enter a competition to win an enormous bear. The enormous bear is the sort of thing that one might get tired of very quickly. In fact Angus has to wonder what you would do to get it through the front door ? Any toddler finding this under the tree on Christmas morning would probably lose the power of speech for a week. 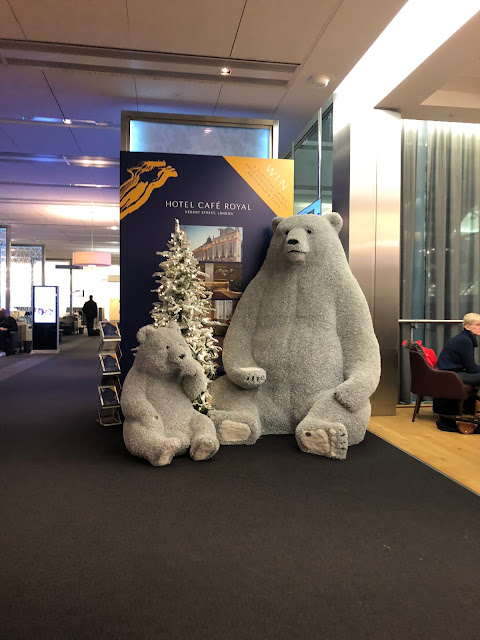 Song # 10.  The girls in the choir, being Swedish, are quite unperturbed by all the naked flames : https://www.youtube.com/watch?v=6wIRw0m0xrk

Email ThisBlogThis!Share to TwitterShare to FacebookShare to Pinterest
Labels: Bob and Sophie, Polish

Any parent who won that bear would have to build an addition on the house to make room for it. Scary.
Are the new visa regulations from the Chinese? I wasn't aware that they ever issued visas overnight, more like weeks or months. But that was then. At least this way you won't chance having to travel with a giant-bear-toting parent.

I would prefer the smaller bear. It is an odd choice of raffle prize.

The sandwich shop has a lot of employees working, a level of staff you would never see here.

The flower stand looks very Eliza Doolittle.
It doesn't seem like a good moment to go to China, but then, you aren't Canadian or American.

Doubly amazing that there are so many staff ( and customers ) there at ten to six in the morning !

Just pray the Brits don't do anything between now and then. There again the Brits are so fixated on Brexit that the chances of anything happening are remote. The poor Canadians - they do what they're supposed to under treaty obligations and at the request of their southern neighbours DoJ - and then get all the blame. Guess its less trouble to arrest a Canadian than an American.

Hari Om
Albino dwarf reindeer and megasaurus bears... do you think the airport was getting Christmas confused with Halloween..? YAM xx

Expertly applied eye makeup combined with the beard is an interesting juxtaposition. Such a beautiful voice singing my favorite carol. Our local fire department would have immediately rushed in and removed all of the beautifully lit candles.

A child losing the power of speech for a week could be a good thing. And the bear planted where a would-be burglar encountered it could be an even better thing.

I think the cost alone to get the bear to its destination would have to cost as much as a plane ticket itself. But I'm sure that somewhere in a store, a parent is buying one as a Christmas present.

Angus, only you could make an early morning walk through the airport interesting!

The eye makeup was over the top just like the huge bear. I hope our fellow canadians will find there way home soon. Cheers.

The girls in the choir were probably told the candles were of the dripless variety. That always makes me feel better!

I think you will enjoy this thread Angus :)

Some very dry responses. Don't know what the NYT has against London but it's been a thing with them for a long time.