We're up early talking to men in dark suits about Brexit before heading off for our walk round the village. By 7:00 am the Polish plumbers are hard at work. We say hello. They hope to have installed the hot water boiler by the close of business today. If successful they will then move their sleeping bags from the van to the warmth of the house. 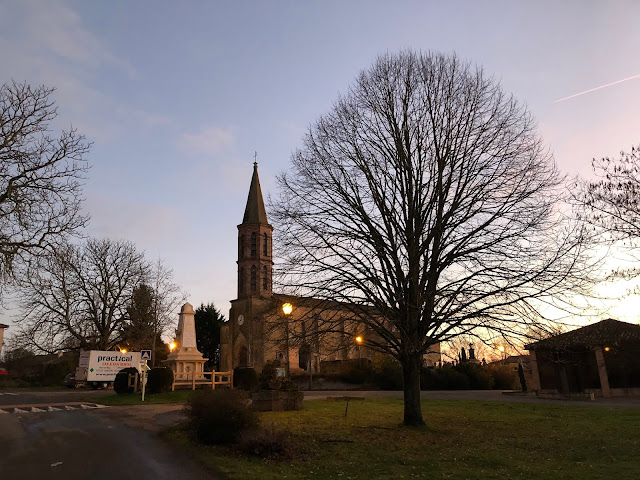 By now the plumbers have met the PONs. Bob is happy to greet them. Sophie maintains a diva like aloofness. It takes more than a cheerful hello to win her heart. I tell the Polish plumbers that Jaffa cakes would make all the difference to her attitude. They laugh.

This morning the angelic duo chase invisible cats around the garden. Bob sits and daydreams-  unaware that his sister is hurtling down on him at high speed ready to pounce. 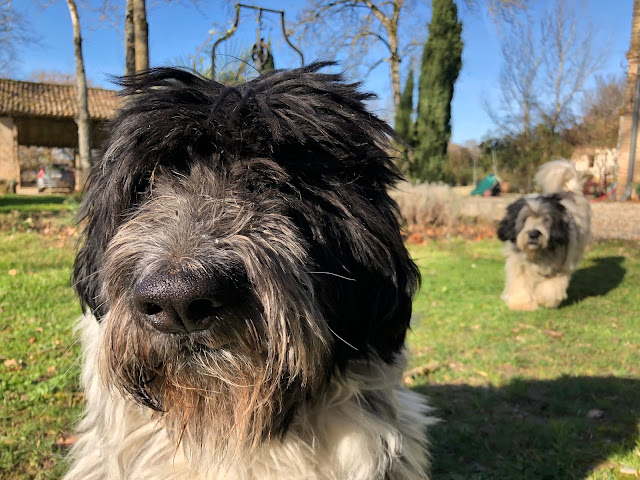 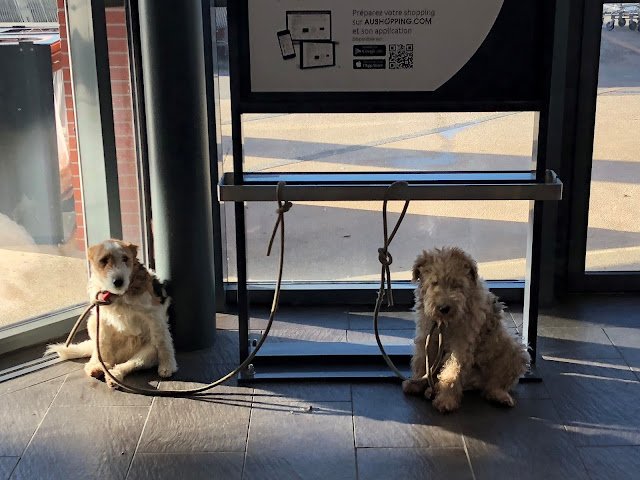 One of the dog seems to be taking 'abandonment' relatively well. The other looks plaintive. They get an ear scratch and a word of encouragement from a passing Scotsman. 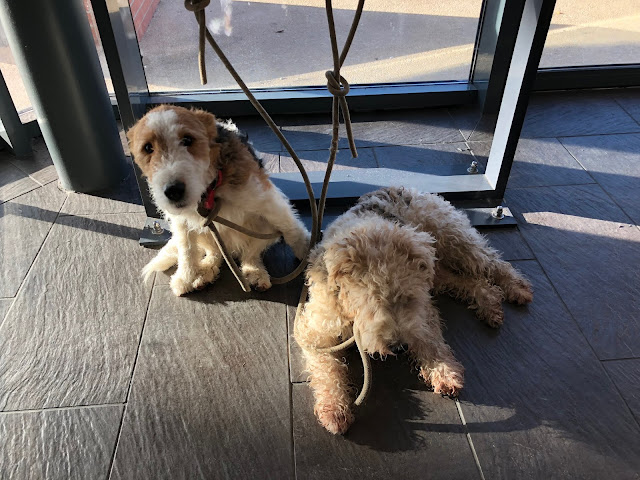 I am wondering what the men in dark suits (are there no women in dark suits, not even after all his time?) have to say about the Current Occupant, and if their opinion approximates that of a rather hefty majority of US citizens, because this dystopian rabbit hole we're down seems to be getting deeper.
The supermarket dogs look quite forlorn. Hope someone gave them some bits of croissant.

What does your magic ball say about the future? Is the UK going to commit economic suicide? If so, will the corpse knock out Europe? And if the wannabe autocrat in Washington keeps up with his incredible negotiating skills, will that tip the U.S. into the recession quite a few people are predicting? Will that be a second corpse falling on Europe? And will said autocrat try to get out of the mess by starting a war, maybe with Iran, maybe with China? And in France, will the gilets jaunes see the UK going down and decide to do the same thing as a way to stick it to the rich? (I am all for soaking the rich, but through taxes and tracking down their offshore money, not through vandalizing.)
Maybe it won't matter because climate change will wipe us all out.

Oh I love the scruffy terriers. We are glad we live in New Zealand away from all this political craziness. I've almost given up watching the news.

Hari OM
Now, there is more than a passing acquaitance to Wire-hair Fox Terrier in those 'abandoned' ones... but is it possible to look more dejected??? The ropes are an interesting aside... There are some politicians this side who look equally dejected and out to be kept well away from any rope-like objects. YAM xx

I read about the study in November when it came out and found it really interesting. Being Australian I try to stay up to date with the research in this area and had already drastically reduced my sunscreen use because I live in France, where the UV levels are significantly lower than Australia even in the height of summer. Having said that, I swim every day outdoors in the summer and got told off today at my annual dermatology check up for still having a obvious bathing suit mark. I started taking a VitD supplement a couple of winters ago, and only take it in winter. My main reason for doing so was maintaining bone density, and there is nothing in the studies that indicates that supplements don't help with that (my pharmacist agreed with me).