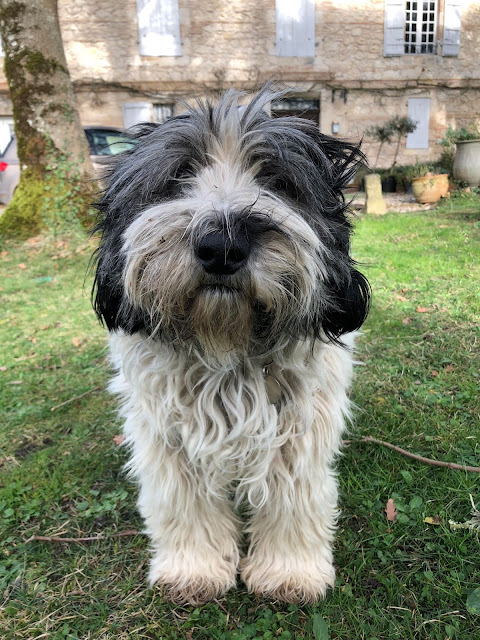 Sophie slips out of the front door and disappears into the orchard. She returns twenty minutes later. The paws and the muzzle hint at mole hill excavating.

Big brother looks at her wearing his ' what did I do to deserve this ? ' face.

We stop at the storm drain. Sophie goes in search of badger poo. Bob has his ears tickled and the mechanics of 'shutdowns' explained to him. The shortage of TSA staff at JFK already causing long ( or longer than usual ) lines. Bob closes his eyes in a good imitation of sleep . 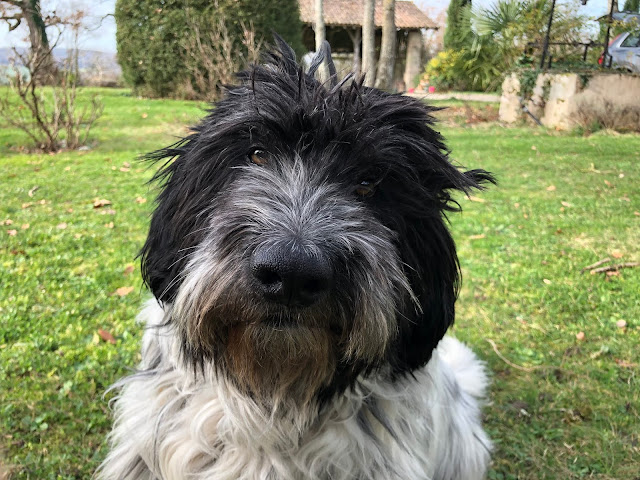 At the entrance to the motorway the gilet jaune protesters have been busy. The automatic pay booth has been petrol bombed. So has a speed camera on the motorway. Thankfully, there are no protesters to impede our morning croissant run. 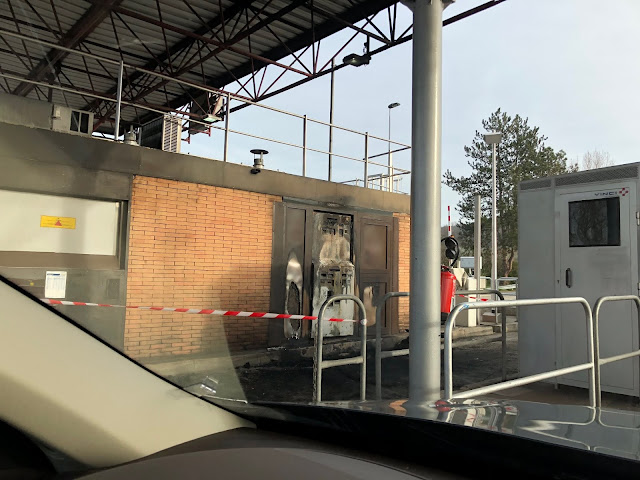 Some added excitement today. We go to the motorway service station to fill up with petrol. Angus gets a coffee. The PONs get a walk around the car park. Tyres with scents of exotic places are carefully sniffed. Bob de-threats the rear tyres of a large Mercedes and a white butchers van. The thimbles and plastic Eiffel Towers at the pay desk don't seem to be selling. A Notre Dame snow globe is a new, and comparatively tasteful, addition to the the display. 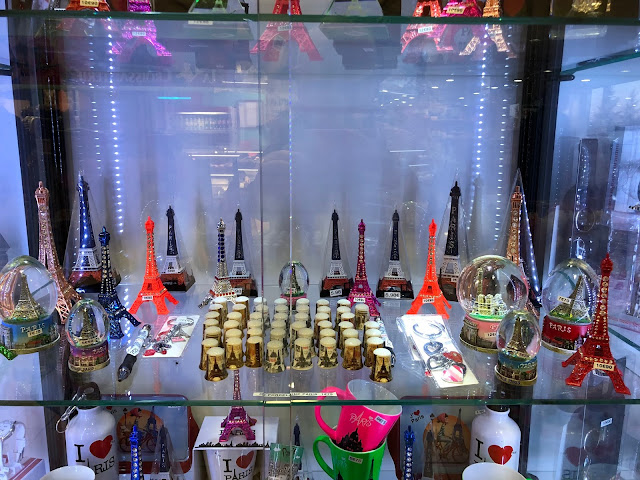 The first time either of us had heard this piece was at a concert last night : https://www.youtube.com/watch?v=O-CC8JyjktE 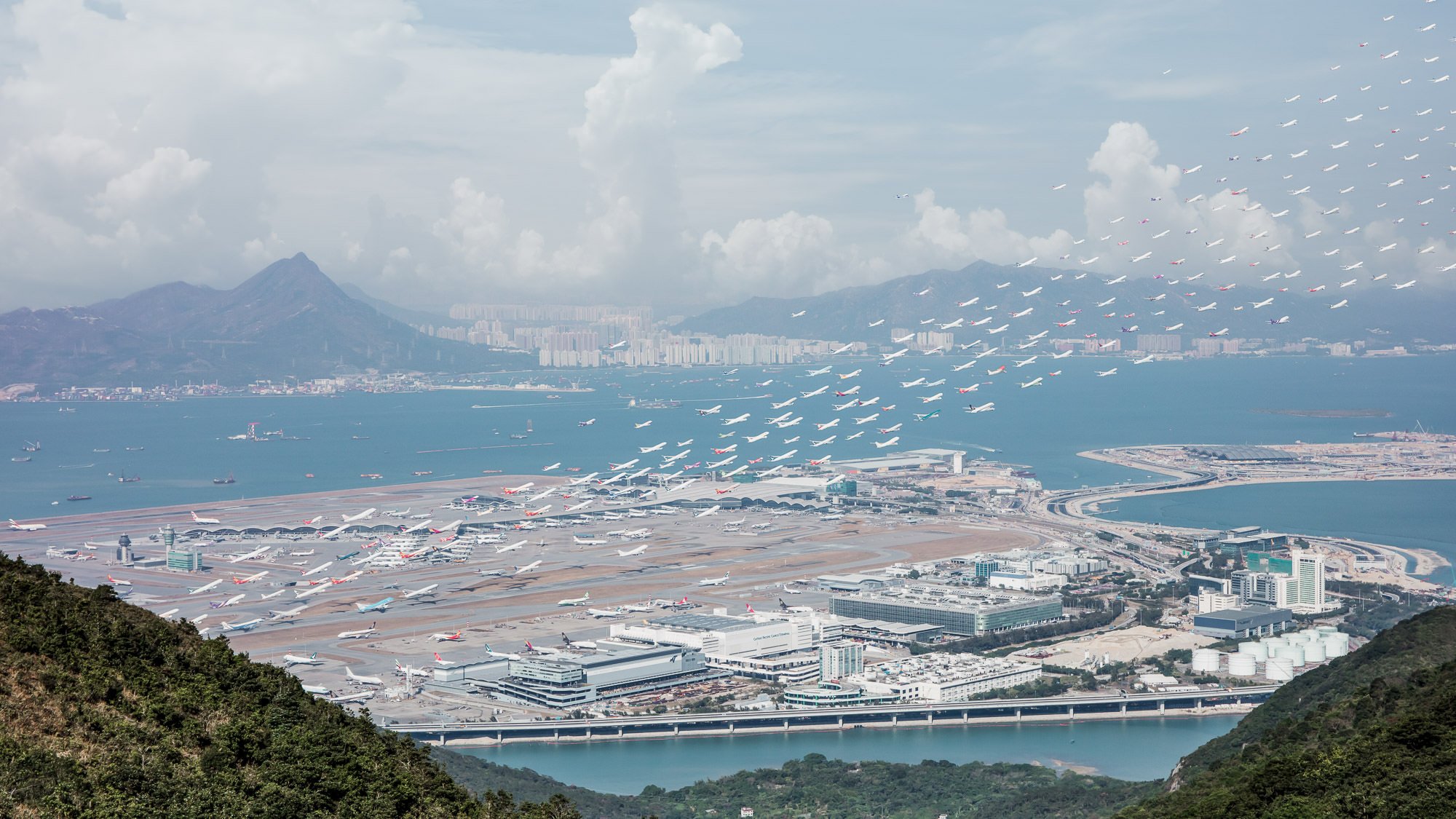 Brilliant. This is  clever composite photo of every plane taking off from Hong Kong in daylight on January 18th last year.

Only on this blog can a visit to a motorway service station be made to seem exciting!
Overheard in the park this morning, addressed to the owner of a terrier sporting a high vis jacket. "So is Rusty supporting the gilets jaunes?"

One of my husband's running shirts is dayglo yellow and he gets joshed about it every time he appears in the street in it.

The plane photo is quite amazing. I do like the photos of the pons somewhat better though. Please give them a pat from me.

Hari OM
As I listen to the sublime Vivaldi, I PONder on the contrast of your discussion point on shutdowns with the image of HK flights! YAM xx

Having just finished "The Guns of August" about the opening days of WW1, I was struck by Barbara Tuchman's reference to France as "that most passionately political and quarrelsome of countries." Those traits seem to be alive and well today, in a different century. The Hong Kong picture is fascinating. Stephanie Jo in Northern California

The Hong Kong picture is amazing. With the old airport, you could pretty much see into people's windows while on final approach. Breath-holding time.
Sophie looks quite pleased with herself in your first picture. Well fed, too.

Nothing like a diet of voles, dessicated shrews and decapitated moles to keep a girl looking well fed.

A lot of folk are reading Barbara Tuchman these days.

They are patted and also get an ear shoogle.

Better not go running in a yellow shirt on the Champs Elysees on a Saturday.