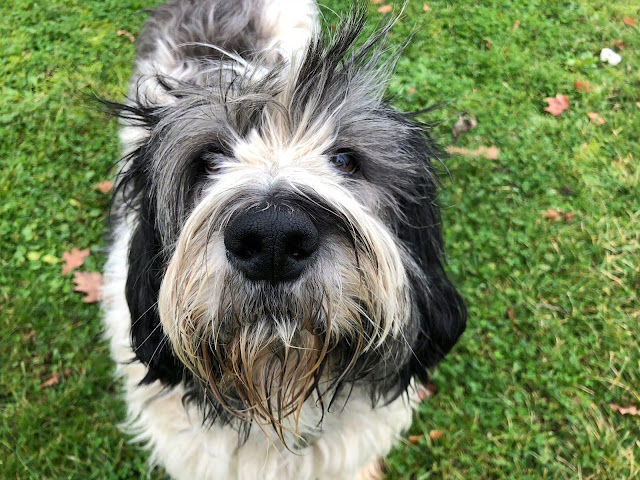 There is a half hearted attempt at snow but the scudding clouds soon pass and the sun comes out. Loic arrives to blow leaves. He tells me a long story which is completely incomprehensible. I say 'Mon Dieu' and whistle. This response seems to keep him happy. He is allowed to drive the lawn tractor. At this point the PONs are 'encouraged' indoors. Loics directional skills are prone to rapid changes.

The Polish builders have moved their sleeping bags from the van into the house. There's now a partially functioning hot water system. There's also power and a working tap in the kitchen. As we pass we can see the four of them sitting around a primus stove under a solitary light bulb. They seem to brew endless cups of tea. We are invited in but thank them and move quickly along. Sophie hasn't had her breakfast and is in no mood for small talk with strangers. 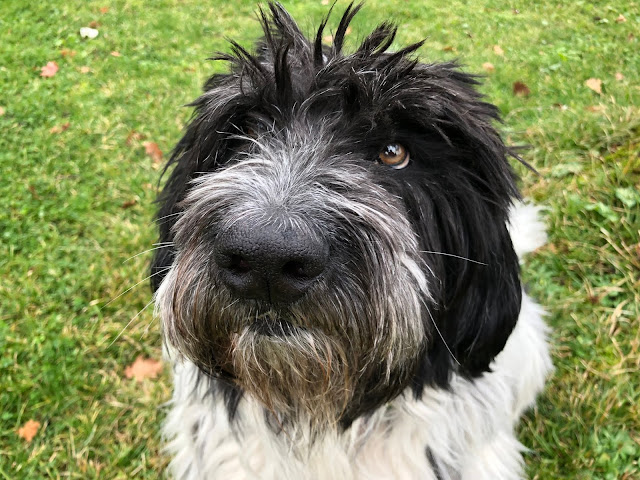 Angus and the PONs do their  tour of the village. Goats, horses, hens and cows are all checked. The donkeys have wandered down towards the bottom of their field but they lift their heads and look back up towards us . Sophie stops and sniffs the air. Donkey smells can waft quite some distance. 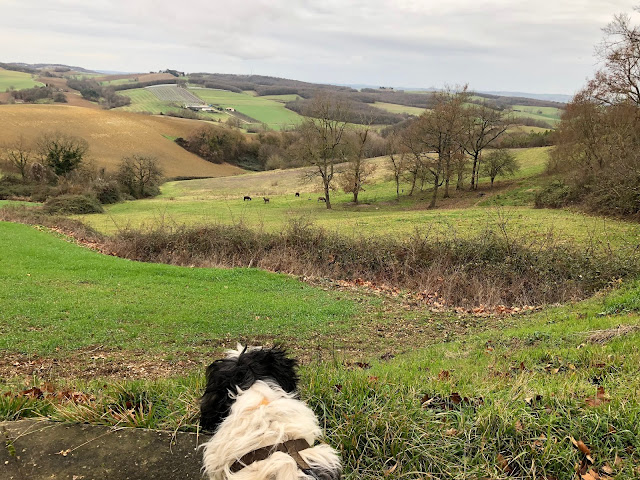 This morning we are torn between a Dome plein fruit .... 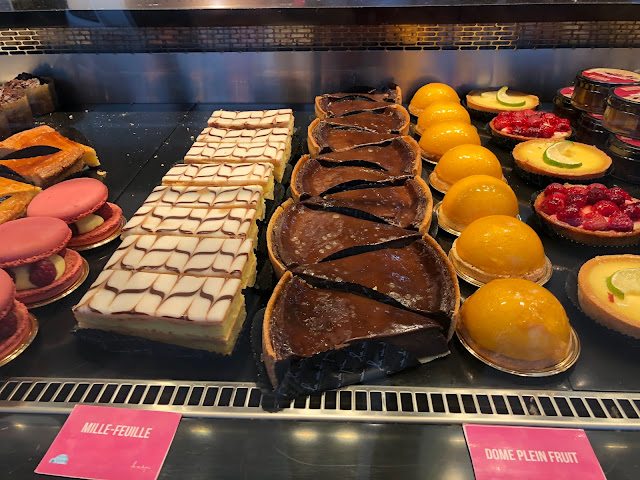 ... and a lemon tart. Bob and Sophie shuffle impatiently while waiting for the croissant to come out of the bakers oven. The curvy corner are still piping hot. Life just keeps on getting better and better. 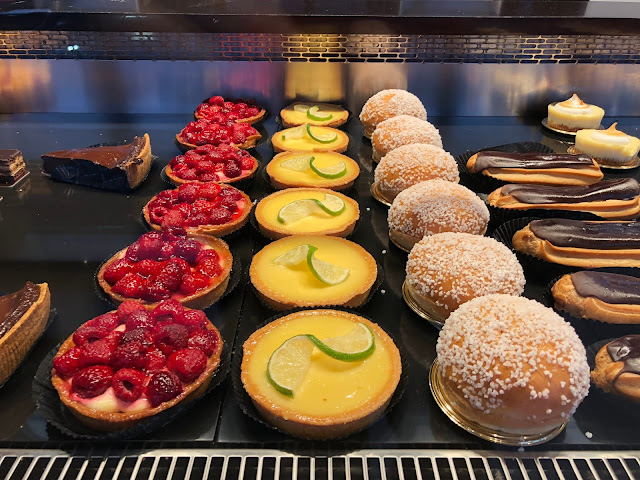 So starts another day with two lively and enthusiastic Polish Lowland Sheepdogs.

Things are looking up in the cake front.

We agree - the cake selection is much better today.

Hari Om
I too think the baker has had a new lease of inspiration with the new year... the raspberries are calling me. Sadly, I will not be taking out a subscription of the FT to read an article, no matter how well recommended. YAM xx

Here's a not behind the pay wall story of the Scots chef in todays FT : https://www.goodfood.com.au/eat-out/good-food-guides/orana-chef-jock-zonfrillo-on-kicking-heroin-homelessness-and-madonnas-dog-20180220-h0wdun

The mylar advertisement reminds me of this New Yorker cartoon of the edge of the universe: http://www.lilaash.com/cartoons-1/
Because there isn't enough space junk out there.
Another bad idea: to make Mars habitable after we've ruined earth, set off martian warming. Would love to hear the Font's opinion of this: https://www.ted.com/talks/stephen_petranek_your_kids_might_live_on_mars_here_s_how_they_ll_survive?language=en

All the bake items look good to me. I would like to try each one.

It's getting through the next thirty years until the technology is honed and readied that's the difficult part. As for Mars the idea of sending male offspring there for a while after the hormones kick in would get a thumbs up from The Font.

Me too. Sadly, the PONs and their master are rationed.

I'd opt for the lemon tart with the nifty lime-slice trim. Quite bright and cheery in a gray January.
Alas, your FT page is full of firewall. I understand the need for publications to ensure a revenue stream -- reporters have an unnerving habit of wanting to be paid enough to eat, after all -- but wish they'd find a way to price them so casual readers could participate without major commitment. Maybe the men in dark suits can solve that economic puzzle.

This winter is full of challenges. We just came out of a 30 hour loss of power due to wind and lightning strikes. The return of heat and water were cheered with hurrays. I would celebrate with any one - or more - of the baker's tempting offerings, if only I could. Stephanie Jo in Northern California

P.S. How I would love to hear Sophie's ferocious yodeling noises mentioned on yesterday's post!

hari OM
that's brilliant, ta! All the more of interest for the fact that one of my young cousins who has spent the last five years cheffing at top level in London (via Gleneagles) is returning to OZ - and specifically Adelaide - to start his own restaurant. I'll forward this link. Yxx