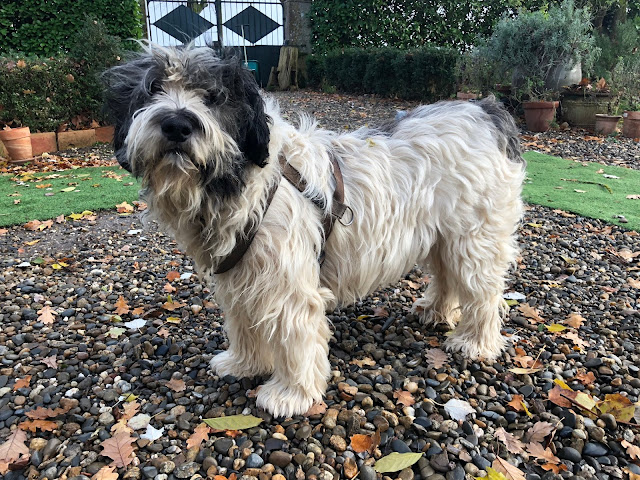 The dog steps not our best purchase. 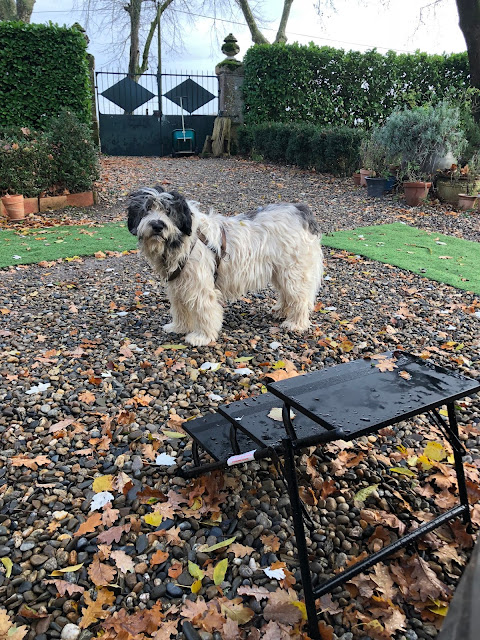 Angus tries to tempt Sophie up into the back of the car by placing a little cheese on each step.

She eats the cheese then stares at the steps.

The process is repeated, several times, over the course of half an hour. She enjoys the cheese but continues to stare at the steps with a look of unvarnished incredulity on her face. Perhaps she'll get the hang of it tomorrow ? 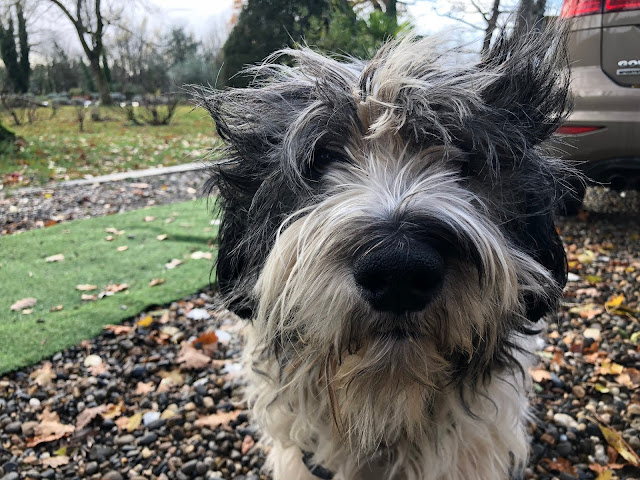 The bakers wife has decorated the bakery window. She clearly has her mind on other things. 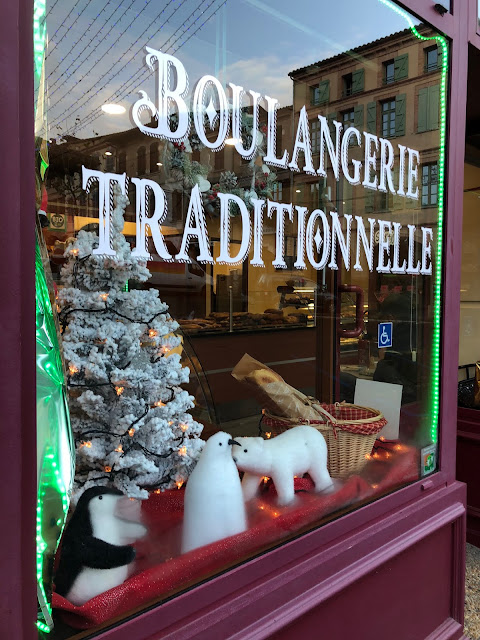 The cafe run by the couple that dislike dogs seems decidedly unwelcoming on this breezy December morning. I tell Sophie that we're not missing anything by being barred from the premises. She hops up into the back of the car. 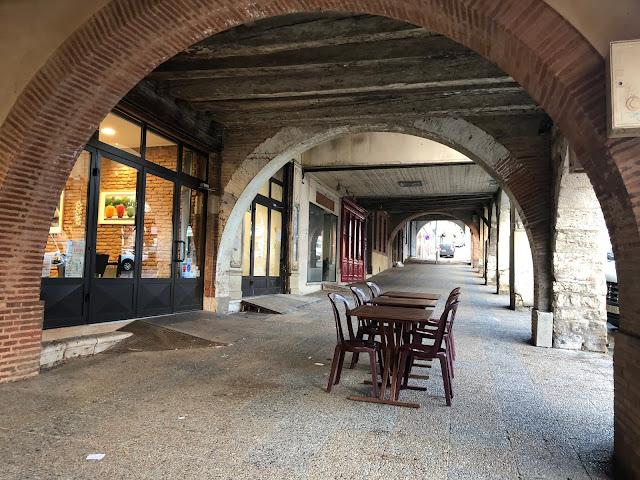 To Sweden for Christmas song 7. Quite remarkable. Possibly the most theatrical performance of O Holy Night you'll ever see :
https://youtu.be/3Tmz_QaQr9g?t=49

I'm rendered speechless by today's Christmas music. 'Remarkable' doesn't quite cut it...
Hoping your patience with the steps will be rewarded. Worth trying a filled yoghurt pot just inside the car, beyond reach inside the boot and accessible only by the steps?
Cheers, Gail.

Hoping the stairs are not as 'wobbly' as they appear. It would be a tragedy if SOPHIE were to actually climb the stairs, then 'spook' if they wobbled, and she fell and damaged those titanium-wonder-legs. Since she has obviously been hoping in and out of the car for years now -
if it is her 'dismount' that has you worried - why not hold her harness tight to her body when she goes to exit from the car, easing her down. I think she would catch on quite quickly. As I said.......those stairs look very wobbly and unstable. Worrisome here on the Westcoast of Canada.

With Sophie we've discovered there's no such thing as a treat that's 'beyond reach'. Where there's a will .....

There is a Cesar milan clip on YouTube where he trains a dog to use a step to get into the car. Good luck.

Are you sure Sophie isn't a Labrador in disguise? She seems to have all the traits - especially when it comes to food!

We have had better luck with ramps, than steps. Even then, we had to carpet cover them. Then it takes a while for them to use it. Good luck.

Last year's music was my first introduction to Rickard Soderberg and I am happy to be reintroduced! I always think that O Holy Night among all carols can take as much drama as you can pile on. Hope Sophie gets with the program on the steps or that you are able to find an alternative she thinks more acceptable.

Perhaps Tomorrow? I don't think so! Even Cesar Milan might find he'd met his match in Miss Sophie. I'm in favor of the carpeted ramp.

Definitely try a ramp. Here's one carpeted and foldable, but there are many others on this site:
https://www.chewy.com/pet-gear-free-standing-extra-wide/dp/125535

If you do get a ramp, start by getting Sophie to walk on it flat, then gradually increase the incline she has to walk up. Alternatively place those steps by your kitchen table, put some chicken on the table top, leave the room and I'm guessing she'll quickly work out how to use the steps!

I don't know if any of our crew would do the steps either, even with the best of treats. But it would probably be because they can see through the steps, and if they move even a little, they chicken out. A ramp is a consideration. But given the slant it would need to be to get into the car, and if it moved, Sophie may have the same reaction to it. We have a ramp off of our back-steps, and even with just 2 steps, most of the dogs won't do it because it is narrow, and if/when they feel it move, they get right off of it. Just my rambling thoughts on a cold rainy day in Virginia. Good luck finding a solution.

After hitting it out of the ballpark with the ginger rabbit don't dispair. Perhaps using a Champagne crate as a step between the ground and the tailgate would be worth a try; the steps could be repurposed as a plant stand. Just a thought... Good to see Sophie as happy and strong-willed as ever.

I laughed at The Life of Riley's comment. Perfect for Sohie.

I can recommend a dog ramp. A gentle incline - and cheese - means that they very quickly find that they are in the boot of the car almost without noticing. Very necessary for elderly 25 kilo Airedales.

Old saying, practice, practice makes perfect.
Sophie is a smart girl.
She might be holding off for a ramp.

Our next-door neighbour tried stairs, similar to yours, for her Golden Retriever. With no luck after three weeks of favourite treats, attempts with encouraging praises, and several kilos worth of Cheddar. On Sunday, she gave in, and bought a carpeted ramp. A few tries, and success! It took two days, resulting in good news for both dog and exhausted owner. She says she laid it flat the first night, and her dog slept on it! Next day - she was receptive. Good luck Angus - and Sophie! (Note: The discarded stairs now hold three large Poinsettia plants - as a welcome by her front entrance.)