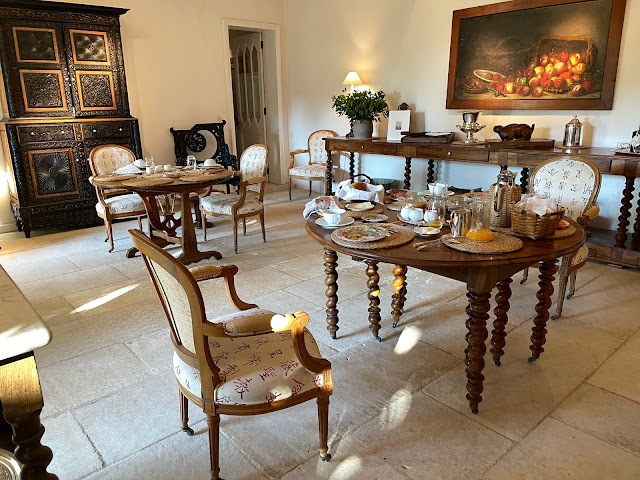 Home to find the inbox full of offers from East Coast hotels saying they are now open for business or are about to re-open. Despite the stories about inflation the prices still seem to be reasonable - by US standards. Most of the e-mails suggest that daily sheet and towel changing is optional. This is put down to 'Managements emphasis on Covid hygiene ' but Angus can't help but feel that it's a cost cutting exercise. The removal of check in staff and their replacement by a touch screen option is frequently highlighted as an 'enhanced hygiene option'.
The little hotel by the sea also had measures in place to deal with Covid . The breakfast room was set up so that no more than 4 guests could be in there at a time. It had also cut back the number of guests who could stay from a maximum of six to .... guess what ? ..... four. 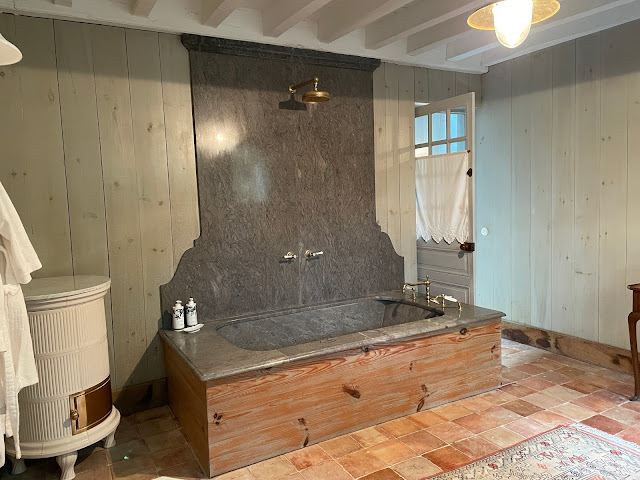 It must be an age thing but French plumbing has become a fall back topic of conversation. In the little sea side hotel the bath was a strange granite and pine affair. No matter what levers you pulled a jet of scorching hot water would emerge from both the shower and the taps. The dimension of the bath also meant that you had to be at least nine feet tall to step comfortably over the extra wide bath surround. Angus wonders if the stove, placed alarmingly close to the bath tub, might be a danger for jet lagged or slightly tipsy bathers.
After the excitement of her trip Sophie has spent all day sleeping. In fact she's been sleeping so deeply that we've been checking up on her breathing. She is exhausted. Despite a thorough grooming there is still sand in her coat. 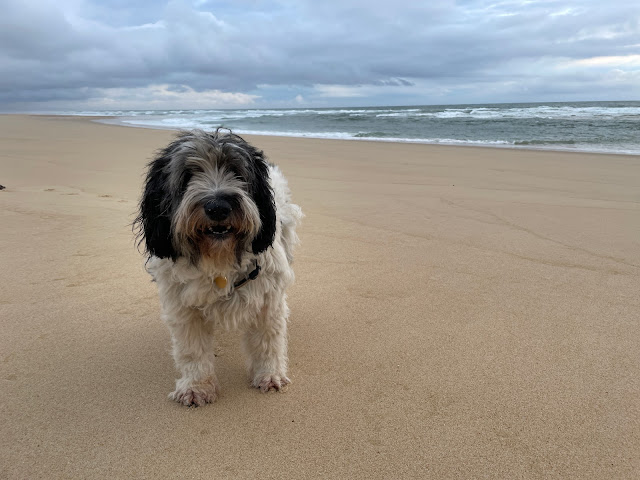 Here in the village it was the second round of the voting in the regional elections. Turnout was low but the centre right candidate got two thirds of the vote. The Presidents party came second.  The even more interesting development is that the eighteen year old son of the man with anger managements  was found 'canoodling' with the German builders seventeen year old daughter in the barn behind the village hall.  With the court case due in a months time this Romeo and Juliet style amour has not been well received. We await an update from Madame Bay. 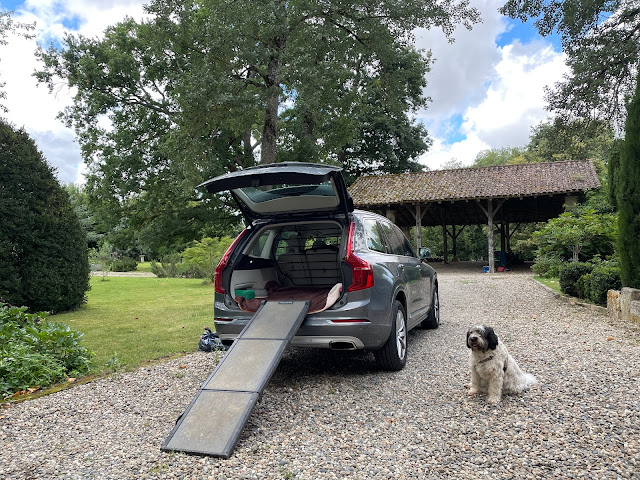 The bath/shower design is indeed extraordinary.
Canoodling shocks would appear to be this week's news on both sides of the Channel.

I think plumbing is a topic of conversation everywhere - it's kind of interesting that it is one area that still reflects distinct national preferences and has not yet yielded to some cookie cutter international standard. Amazing about the canoodling - so much excitement in one small village.

Poor Sophie - she's been 'on duty' on foreign soil for days, so naturally she's exhausted. I hope she wakes full of beans tomorrow.

At least that was just a bath - over here lots of motels have showers over enormous Spa-bath contraptions. They're seriously dangerous to step into or out of, and a slip can mean a cracked rib, or worse. We've taken to asking for Disabled units, because these always have a walk-in shower, and often a whole bathroom that's flat. I've also found that placing a bath towel over the edge of the bath makes stepping in easier.... the joys of getting older!

Sophie must have had a good holiday if she came home needing a long nap!
The little hotel looks inviting, but the shower and bath look terrible - and rather dangerous. All the excess shower water on the tiled floor is a recipe for disaster. I do hate these huge shower heads, they are totally impractical for we females. We don't always want to wash our hair each time we shower, and wearing a shower cap just flattens our coiffure.

I love the look of your hotel. I have googled sans réussir. Would you feel able to share the name, please?

When it comes to "style over substance" the hotel bathroom gets 10/10! Looks good but not functional....we've had the joy of using quite a few like that! Although in most of the French hotels we've used mending the plumbing has been the first job before unpacking!
Could the two lovebirds bring unity to the two families? One can hope!

Hari Om
this 4'10" chicky babe would have been resorting to dunking in the sea. That's an impossible arrangement for moi. My own is bad enough and I can touch walls on both sides and have a sturdy grab bar. Working up to converting to wetroom...

I laughed at Angus' post and Bertie's comment! Such delicious (and consequential) "gossip"! I await Mme. Bey's report with bated breath.