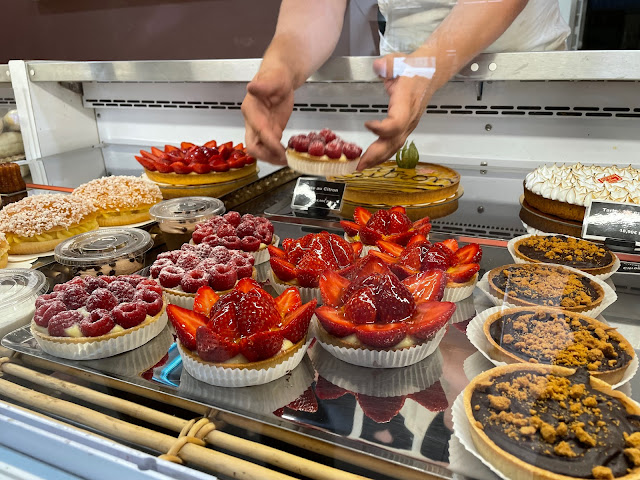 To the bakers for a raspberry tart for lunch. It is an unusual size - not quite enough for two portions but definitely more than one. This works out well. The Font will take one, possibly two mouthfuls, mutter ' Delicious !' and then push the rest across the table for Angus to finish. Sophie may get a tiny sliver of the pastry.

Having consumed our coffee, croissant ends and ( in Sophie's case ) a bowl of water we head down to the river. At this time of the morning the place is deserted and we have the entire waterside to ourselves. Tonight we shall be heading off for a three hour trip across country to the seaside hotel. The reservation team ( I think it's not so much a team as one technology indifferent lady )  finally confirmed the reservation last night. 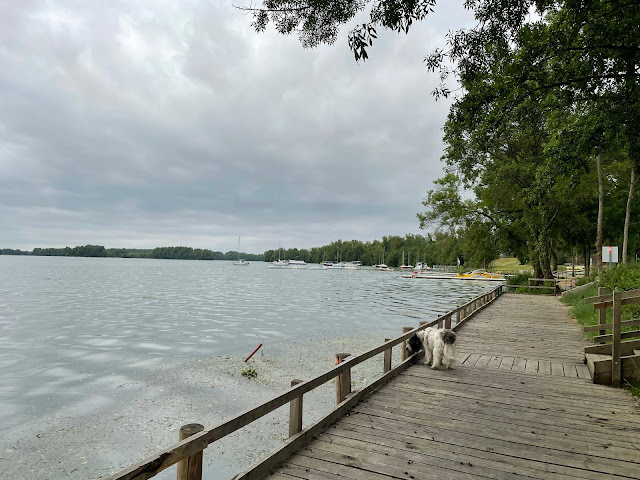 The storms have brought down a lot of branches. These bob around in the water and bang against the wooden jetty. Sophie finds the sound to be intriguing.  Every four or five yards she stops to see where the noise might be coming from. At one point I pick up my pace as she sticks her head through the fence and considers leaping into the water . Thankfully, something distracts her and she thinks better of it. 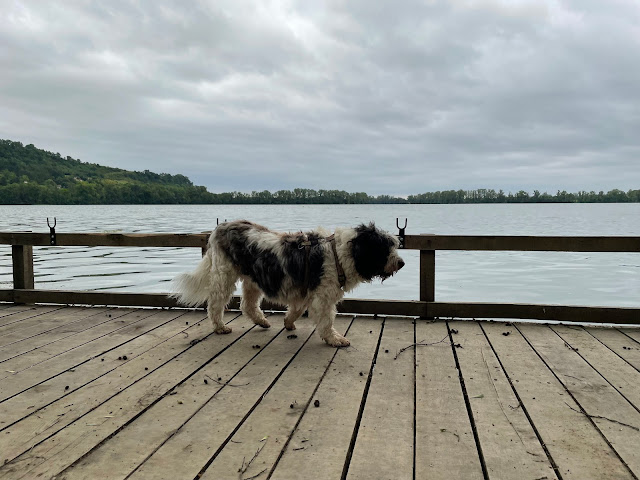 According to the front page of the local paper the Pentagon is about to release a report on UFO's. This can't come a moment too soon for some of the village residents who remain convinced that our little corner of paradise is a tourism hotspot for visiting aliens. In the departmental capital there is a bookstore that sells cheaply bound paperbacks describing inexplicable lights and shapes hovering over the provincial French countryside. Cynics might attribute these sightings to the locals penchant for excessive wine drinking. Madame Bay, who long time followers will remember as a frequent visitor to the The Rickety Old Farmhouse before her arthritis became too severe, is convinced that aliens make a bee line for her orchard. Quite why this should be the case when they could, for example, go to Paris is treated with a shrug of the shoulders. ' I've seen the lights M'Ongoose! I've seen the lights ! ' Madame Bay has been instructed to stop driving by the young doctor in the medical centre. She is now driven round by her long suffering hairdresser daughter Sandrine. They bicker constantly. You can hear them before you see them.
There may, or may not, be a break in blogging for a few days. The hotel says it has 'weefee' but adds that the signal varies. ' Sometimes it's strong, sometimes it's not. It is the countryside Monsieur '.
Posted by Angus at 6:14 AM

Enjoy your trip away. I do hope Sophie is a Very Good Girl, and becomes a firm favourite of the hotel Management!

I am so looking forward to reading about Sophie's seaside adventures. Enjoy your break!
Cheers, Gail.
PS Who could forget Madame Bay and her exotic wardrobe?

Have a wonderful time! As to Gail's comment, maybe you could slip in a photo of Madame Bay sometime for the benefit of any latecomers who missed your marvelous descriptions of Madame Bay Hoovering in a turban and a swirl of chiffon? We've had at least a glimpse of some of the others of whom we've all become fond - Loic, the Old Mayor, the Old Farmer - why not Madame Bay?

In spite of her penchant for exotic apparel, perhaps Madame Bay is camera shy?
Have a safe journey, and we hope you've remembered to pack Sophie's bucket and spade. Inca says to tell Sophie that the sea is no big deal, and it doesn't do much, just sloshes about a bit. But.. there is the occasional wave that catches you unaware, on the derriere, when your back is turned.
Never mind the "weefee" - do they have Jaffa cakes? Have a great time.

Hari OM
Will be checking in to see how strong the signal is on any given day! Mostly though - have a great time you three. YAM xx

Always loved the Madam Bay stories and descriptions of her flamboyant outfits. I do believe I saw a UFO one night long ago and yes, there may have been alcohol involved. The Pentagon paper should prove interesting. Wishing you three a wonderful adventure and safe travels.

Sending wishes for safe travels. Please take pictures to send us if their ‘weefee’ signal is working. Have a fun time!!!

That fancy new iPhone can become it's own internet 'hotspot;' fueling laptops, iPads, all sorts of things. In any event, have a wonderful time. I learned recently that a lengthly car trip was a wonderful mental/emotional curative after months of lockdown! Bon Voyage!

Perhaps the perfect holiday is focusing on the two you love most who you are going away with instead of news and other distractions on your iPhone! Although I love your daily blog, maybe leave your phone at the ROF or put your phone on aeroplane mode and only use it as a camera... have a break from technology (can you?) as if anything important happens others who are closet to you will find a way to contact you. Sent with best wishes for your, the Font's and Sophie's first holiday for ages.

Et un très bon anniversaire-même tardif- to Madame The Font!
Enjoy! Looking forward to a complete report on the sea-side hotel when the "weefee" allows.

May the three of you have pleasant adventures!