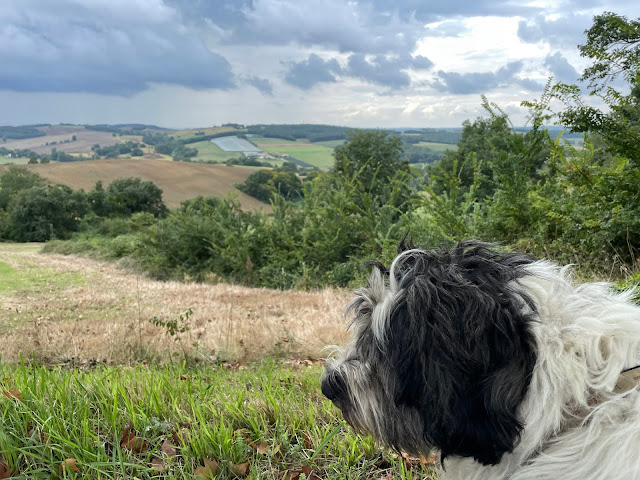 The summer heat a thing of the past.  Down by the storm drain dog and owner sit and watch the clouds scudding in from the Bay of Biscay. Sophie leans in, has an ear scrunch and is told autumn is on its way. She certainly has the coat for colder weather and bracing winds.
This morning we talk to Manhattanites about booster shots, submarines and Joe Manchin. Angus still isn't allowed to go to the US so it's agreed that we'll all meet in London later this month. Quite why double vaccinated Europeans can't go to the US remains one of lifes illogicalities. 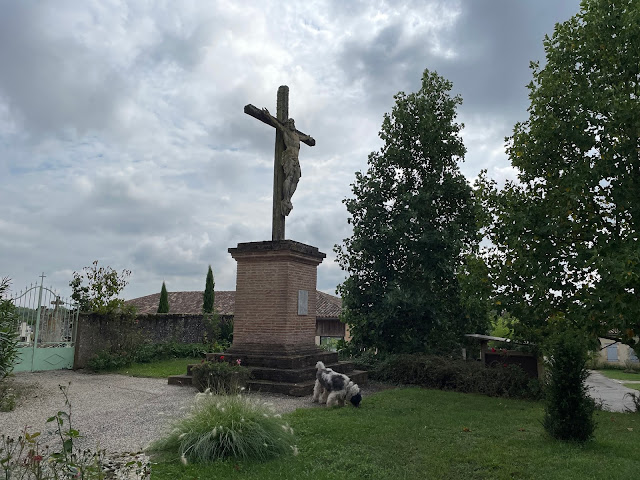 From the storm drain we head down to the Holy Well then back up the ox track to the village green. The overnight winds have brought down the chestnuts which carpet the tarmac in front of the war memorial. Sophie studies the chestnuts closely but decides they aren't to her taste. The men reroofing the outbuilding show up early. They don't have biscuits so Sophie ignores them but carefully sniffs each wheel of their van. 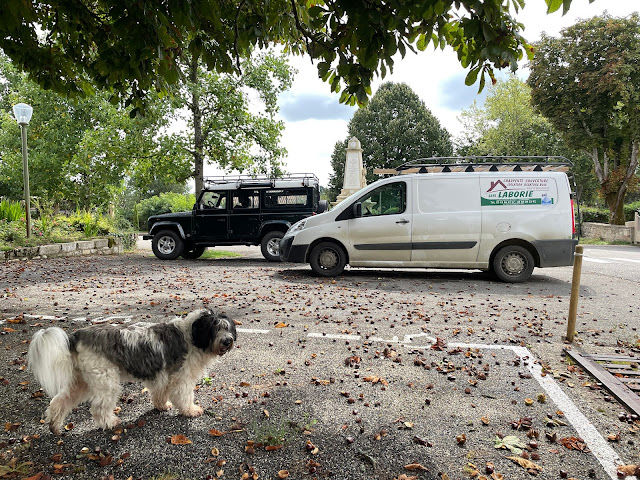 After a lengthy drink from the zinc bath it's time to return home. 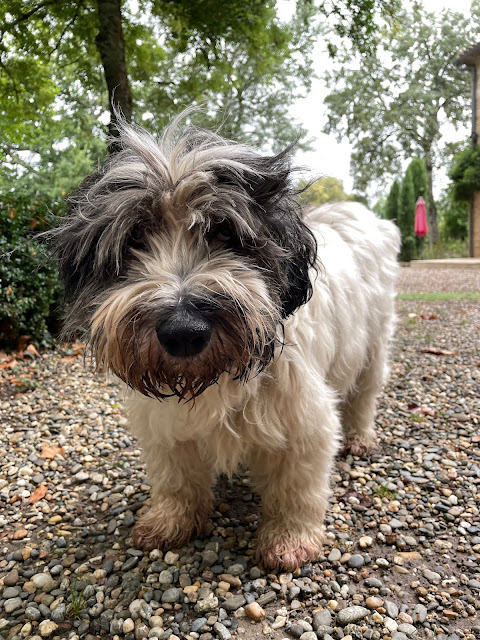 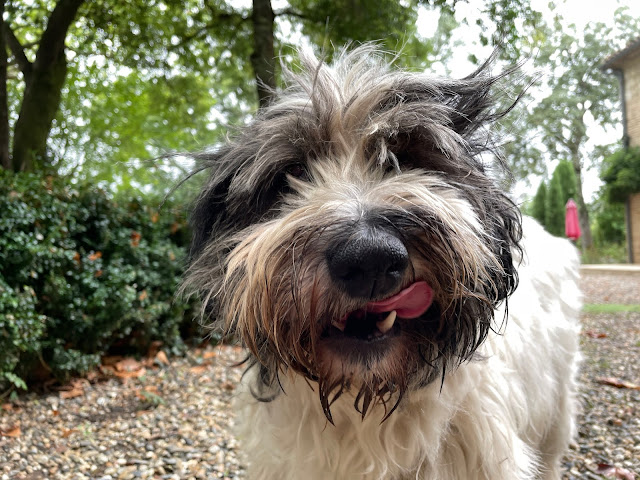 Hats off to them. A new restaurant in London :https://sessionsartsclub.com/

I thought of you this morning when I saw a cartoon - dog intently staring, when shepherd/owner comes up and says "We are going to have to give you a haircut, you've been guarding those rocks for the last hour".

That last shot of Sophie is a doozy! We visited a restaurant yesterday for the first time in a very long time, an old favorite with a terrace overlooking the ocean in Kamakura. We went at 5 o'clock, so there was no one there, and between that and being outside, it felt reasonably safe. Charlie's first restaurant visit. He was quite good at least until the steak appeared. In any event, now that we've got that out of our system, we'll go back to enjoying the menus included in your posts as a substitute for the real thing.

Autumn is on it's way here too. Quite a few degrees cooler on our dog walk this morning, though heavy overnight clouds have already moved on and the thermometer is slowly rising. Yesterday it was 26º just after 8 a.m., but this morning it was 20º. For the first time in months I felt the need of a light sweater in shady areas.
At least Sophie's hair is getting better marks than some of your recent breakfast croissants!

I have heard of various Europeans going to the U.S. and not being questioned about it. At boarding in Paris, we had to give a filled-out form declaring we had a fresh negative test (the U.S. didn't care about vaccination status) on a recent trip. We went 2 weeks after our second shots; at that time France's numbers were worse than the U.S.'s. That has reversed dramatically. In the center of the U.S., nobody wore masks and we got very hostile looks for having them on. A number of restaurants refused to serve us on their terraces, citing lack of staff. We refused to eat in the A/C and moved on. Masking and precautions (and outdoor dining) were better in NY, but in late August it was so hot and humid that all safe, outdoor activity was miserable. We were very happy and relieved to get back to France.

Bertie remembers walking across a bed of fallen chestnuts on his travels to Switzerland five years ago. He found them very uncomfortable on the paws, and wonders if Sophie has this problem too?

The unequal travel restrictions are politics not science. Sorry! Such a sweet little doggie, I'd let him and anyone he vouched for in.

Maybe you are lucky NOT to enter the U.S. - so many non-vaxers and idiotic fights about not wearing masks.