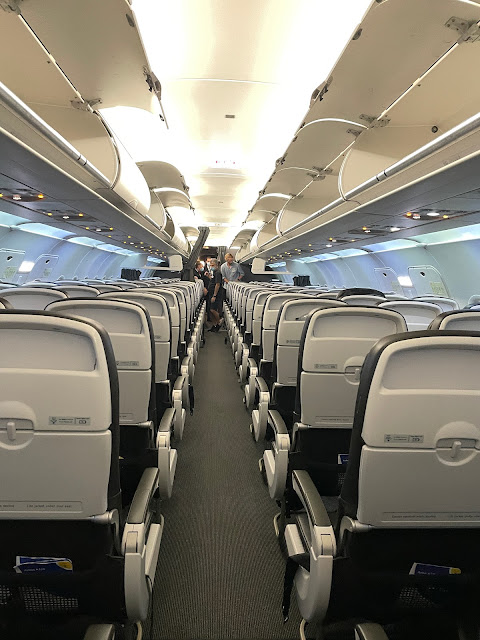 When we landed all 50 or so passengers were crammed cheek by jowl into a bus that would have held 30 comfortably. So much for social distancing. I asked the driver if there was a second bus coming but he looked at me silently in that way that employees of large corporations do when faced with  ' The complaining type' . Until this moment I'd felt safe in a socially distant way. It's hard to be socially distant in a swaying, crowded bus. 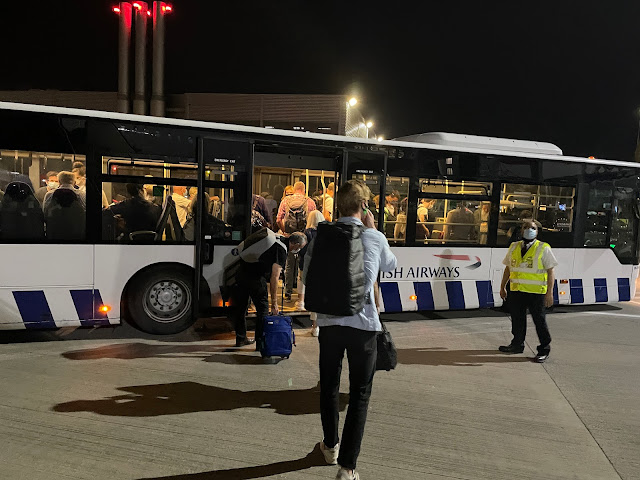 There has been heavy rain in London. The facade of the Georgian town house next to the dentist has collapsed. A large crane and a even larger group of builders indicate that remedial action of a vigorous variety is underway to repair the damage. In London mask wearing seems to have come to a sudden and complete end. 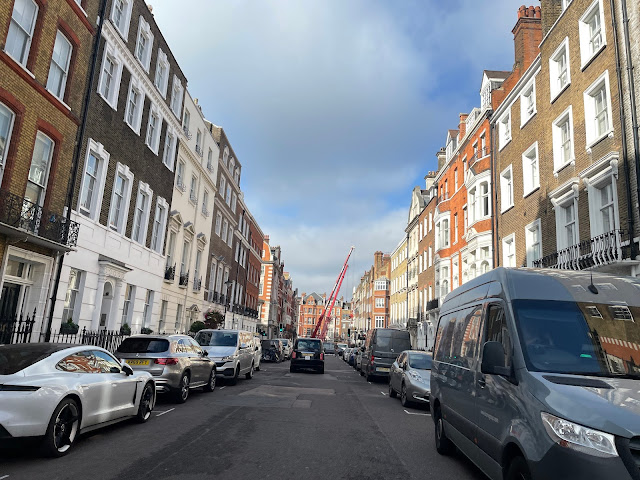 Back at Heathrow after seeing the dentists  it seems that the whole of America is on the move. The over night flights from Dallas, Miami and JFK all connecting to their onward destinations. Angus thinks it a little odd that Europeans still can't get to the US to see friends and family. 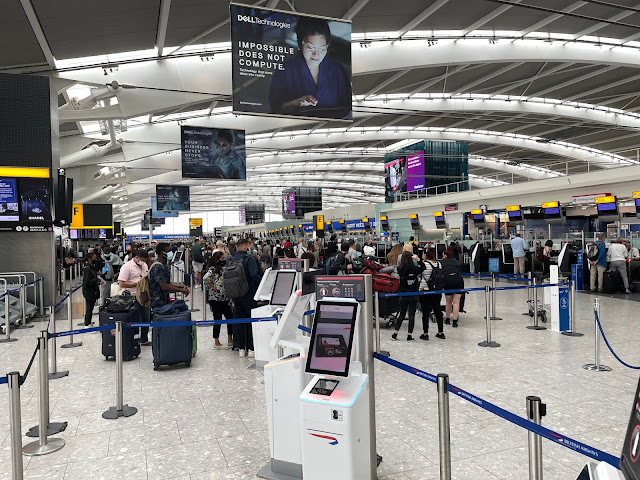 Halloween making an early appearance in the airport store fronts. 'Eat, drink and be scared' the logo in the shop windows. When did Halloween become such a big thing ?  The old Scottish dunking for apples in a bucket of water seems to have given way to something altogether more commercial and less innocent. 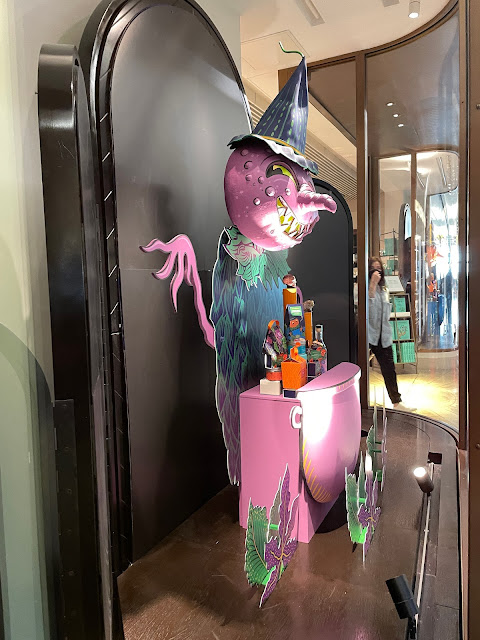 In a trendy store window a tartan suit. Angus views this with deep suspicion and wonders who, and in what circumstances, anyone might wear this ? Another sign I've turned into my father. 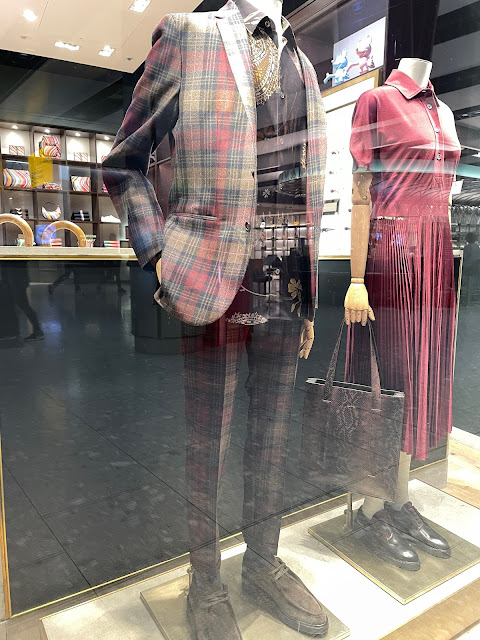 Thunderstorms everywhere which makes both flights 'eventful '.  British Airways pilots have a way of cheerfully describing turbulence as ' We may have a few lumps and bumps en route so please keep your seat belts fastened ' .
The music at Belmondos funeral a very French touch :https://youtu.be/kuokWJMlf-g?t=43
Posted by Angus at 6:20 AM

Welcome back to the UK! Those of us brought up in England more than half a century ago barely heard of Halloween. Autumn celebrations meant Guy Fawkes night, 'penny for the guy', dangerous fireworks let off in the garden and toffee apples back then.
My flights down to Gatwick and back last weekend were both full, with mask wearing thankfully being rigidly enforced by the long suffering staff.
Cheers, Gail.

The suit isn't soooo bad. The shirt underneath is rather frightening!

Maybe it's the combination .

Not sure why the USA has not reopened, or why others are still letting us in.

And no one has commented on the inelegant dress, next to the suit! At the very least, I would have suggested they switch the shoes!

Are those Drainpipe trousers? What a terrible combination the whole outfit is - and where did they get those shoes! That dress would not look good on even the sleekest fashion model, and oh dear - is that a crocodile bag? Are you sure it wasn't a retro fashion shop, Angus?
Fortunately we don't seem to have Halloween "celebrations" here, or because it's uphill all the way, we're too far out of town to bother about. I remember the very first time Halloween "practices" were mentioned on BBC TV in the UK - together with a little film from the U.S., explaining Trick or Treat. Within an hour, I and many of my neighbours, had had our cars (all parked in our driveways) bombarded with flour - difficult to remove because it was raining. Not surprisingly the BBC were inundated with complaints from angry viewers across the country!

They are indeed drainpipe trousers. Tartan and Paisley an unlikely combination.

Thank you. I'd not noted the shoes which do indeed have a 'masculine' look.

High spending American tourists have an allure in deserted hotels in Italy and the south of France.

Hari OM
While I have seen some men braving the streets in tartan suits, they have generally been better matched than this - and rather more green than puce, which makes all the difference. As for mask-wearing. I think Angus had every right to feel uncomfy about the lack...

I do hope you don't mind if I link in my own post today - it covers a subject that anyone with online presence, be it a single blog or multi-social media ought to be think about: our digital legacy and managing it. YAM xx

I came back for a second look at the tartan suit photo. Something about it activated memory cells from 1980s London when I had an advertising executive boyfriend who was fond of Paul Smith suits and shirts. (Incredible but true). A quick look at the relevant website tells me that the shop in the photo must indeed be Paul Smith. Do I get bonus points for fashion awareness!
Cheers, Gail.

Absolutely Gail! But they will be quickly deducted if you own those women's shoes! (Unless they are worn with pants...)

Gail you get both 10/10 and a bonus gold star for observation.

America won't let us Canadians drive over the border, we can fly in. We can't visit relatives or holiday homes.

The Americans put pressure on the Canadian government to let their people be able to drive in to, yes, you've got it, visit family and holiday homes. We reopened. They didn't

We are also better vaccinated than them.