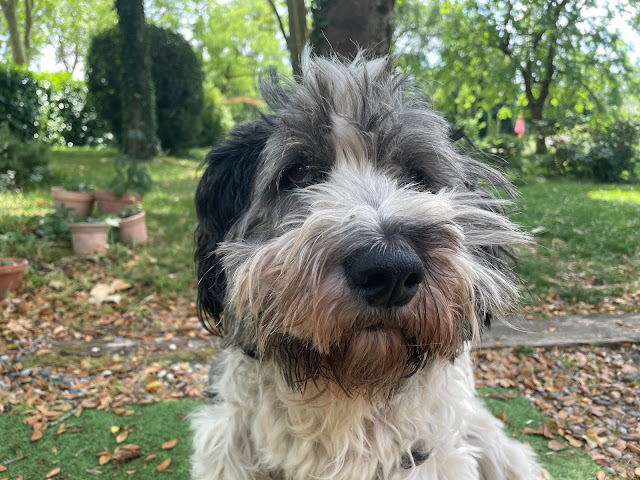 Sophie absorbs the news that she's not coming to the village funeral with an air of disbelief. She will be left alone for an hour to guard The Rickety Old Farmhouse. 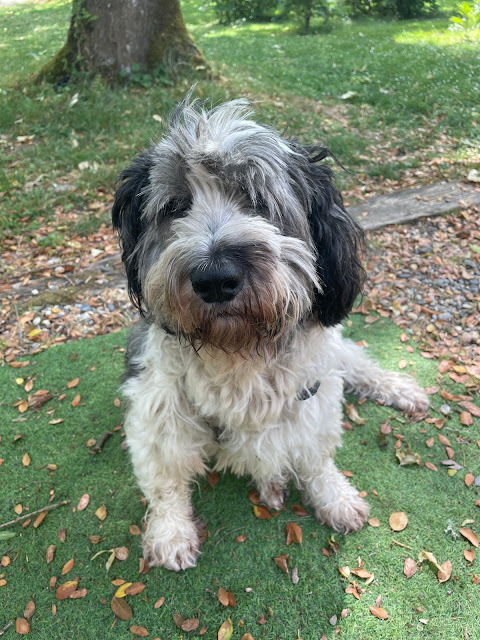 The funeral is more of a black jeans than black tie affair. The two sons acknowledge each others presence with a nod but otherwise remain frostily silent. Each  embarrassedly tries to pretend the other isn't there. One sits with his wife on the left hand side of the church, the other ( in a shiny blue track suit and open toed sandals ) sits on the right . Three ex-wives sit together with a smattering of what are presumably their children. The word 'unruly' springs to mind.

I ask The Old Mayor about the sons 'unusual' names. One was  named after John Wayne and the other after Warren Beatty. In the France profonde of the early 1980's naming your children after foreign movie stars betokened an exciting openness to all things international and new. 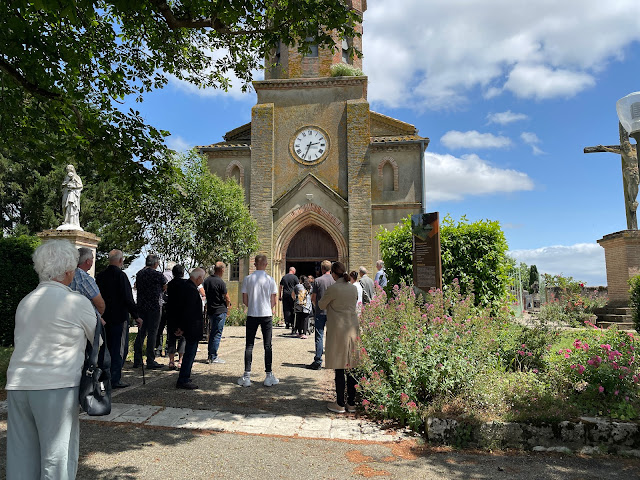 The priest who officiates retired 25 years ago. Today, he has ventured out of the old folks home for the ceremony. He's a game old thing who lights candles, delivers the sermon and organizes the pall bearers with cheerful bonhomie. Music is provided by a boom box which is placed on the lid of the coffin next to the notes for his sermon. The boom box tape has stretched with use which renders the hymns unrecognizable.  Amazing Grace is sung but we're two verses into it before I recognize the tune. 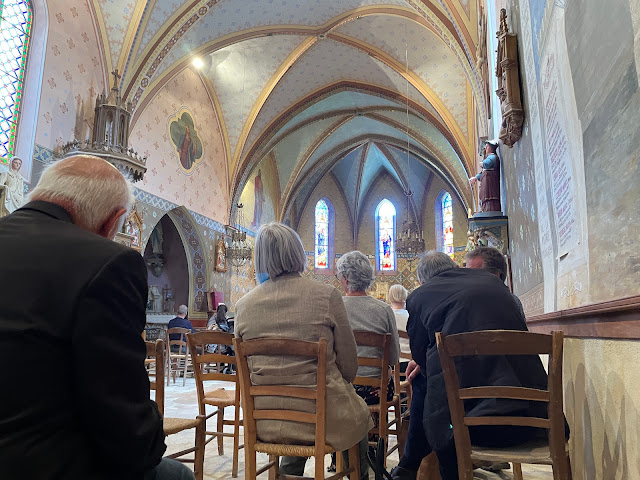 It is a very French village affair. Unpolished but heartfelt. The priest exudes great kindness and well honed dignity. The villagers do their duty and attend. In deepest France profonde lifes waypoints are still observed. As the priest pronounces the blessing the sun, which has spent much of the day hidden behind cloud, suddenly decides to burst out. The little church is filled with light. As 'The Font' says there's not much more than sunshine and kindness you could want at a funeral.
At the end the wives and the two sons head off in sullen silence to the old mans house. Presumably, to 'discuss' the inheritance. We invite The Old Mayor , The Old Farmer and a dozen waifs and strays back for a glass of champagne. The Old Mayor tells 'The Font' how difficult it is to go back to an empty house. He visits his wife three times a day  but she doesn't recognize him . 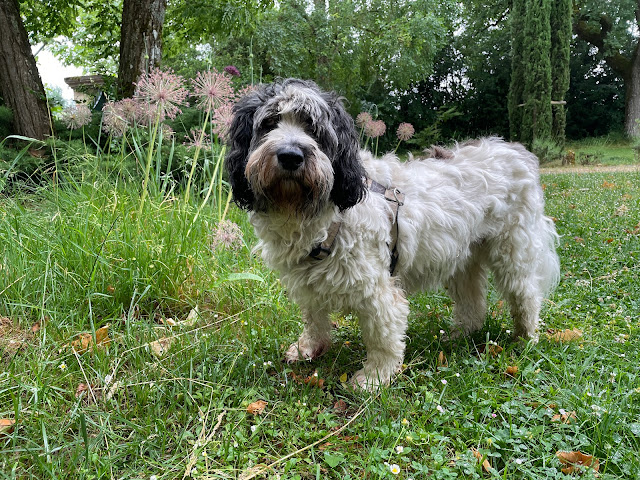 Sophie enjoys having company. She hopes that the visitors will drop their canapes. None of them do. It is clear she considers this to be the height of bad manners.
So passes another day in a small French village where nothing ever happens.
Posted by Angus at 5:57 AM

I'm turning into my mother in failing to suppress the thought that a shiny tracksuit is not appropriate funeral attire.
I remember being told on a visit to Switzerland some time in the 1990s that the most popular boys name that year was Kevin. (Influenced by the then popularity of Kevin Costner, I believe.)
I hope the champagne and company helped dull the Old Mayor's distress, at least for a while.
Nobby shares Sophie's pain at the lack of dropped canapes...
Cheers, Gail.

Oh, how sad for the Old Farmer. In our family, it's seriously formal wear for the funeral, and then "men only" go to the graveside!

I'm impressed the old priest did so well, over here "retired" means almost dead, and certainly beyond officiating at a full blown funeral.
Virginia

Diary of a Nobody said...

I agree with you , I try not to be old fashioned and stuffy but I do think there is a suitable funeral attire and a shiny tracksuit is not it .

How sad for the Old Mayor - it must be heartbreaking for him that his wife doesn't recognise him. Hopefully company, and a glass or two of your champagne helped cheer him for a while.
Inca, too, shares Sophie's and Nobby's disgust at the lack of dropped canapés. However, if we lived nearer, Inca would be happy to give Sophie, and Nobby, some sure-fire guaranteed "No one ever feeds me" look lessons, that will make people share whatever they are eating! Her ample girth is testimony to how successful this is.
Have any fights broken out in the village yet!

Sounds like everyone was lucky to have the right priest for this particular occasion. Hopefully Sophie has forgiven you by now.

Hari OM
One of my 'lost' comments last week was that I shed a few tears for the Old Mayor on reading of his wife's failing and Angus' compassionate hug... and I too hope that he is finding a little comfort from the community this small village in France profonde is providing. How wonderful, too, that we get to see the church in use, albeit for the loss of one of the village's few... YAM xx

It sounds like plenty happened in your village - just not what Sophie wanted. At least no one wore shorts and flip flops - something you might see here.

I feel for the Old Mayor. I heard an anecdote once when someone asked the husband why he visits his wife every day even though she doesn't remember him. His response was that he remembers her. This reminds me of the Old Mayor. Bless him.

Greetings from Ontario. My mother was a faithful reader of your blog for many years. She passed away in 2019. She often urged me to read your blog because it gave her so much pleasure and I'm now doing just that. She'd be delighted to know I laughed out loud 3 times while reading your post today. I'm glad the mayor got to enjoy some company and champagne after the funeral. It must have been a huge mood lifter for him to have good company.

A gathering of family with "a elephant in the room" and, by choice or coincidence, someone wearing a top with a big picture of one!

The Old Mayor, the Old Farmer, and a few stray waifs...all blessed to have two foreigners with a fluffy Ponette comfort them with a bit of champagne and kind words. Sometimes I think the Rickety Old Farmhouse has become the true heart of this 67 soul town.

Thank you for your thoughtful report of the funeral. As she is one of your village's leading citizens, I am in sympathy with Sophie's bewilderment that she would not be among the funeral attendees. Angus, I'm not sure that you can claim that "nothing ever happens" in your village; on the contrary, it's almost overflowing with dramas!

Second morning of silence from this beloved blog ... worried in Chicago. Very much hoping the interruption in blogging is simply an internet issue or something equally benign.