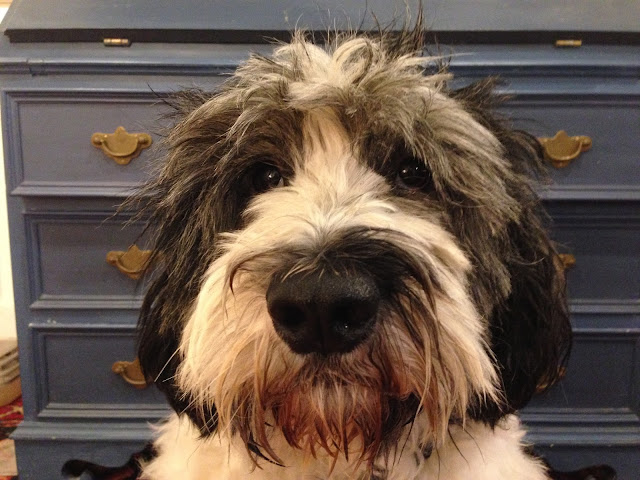 This morning Sophie comes into the office and presents me with a dead vole. When I try to take it away from her she swallows it. Her satisfaction at this turn of events is obvious. 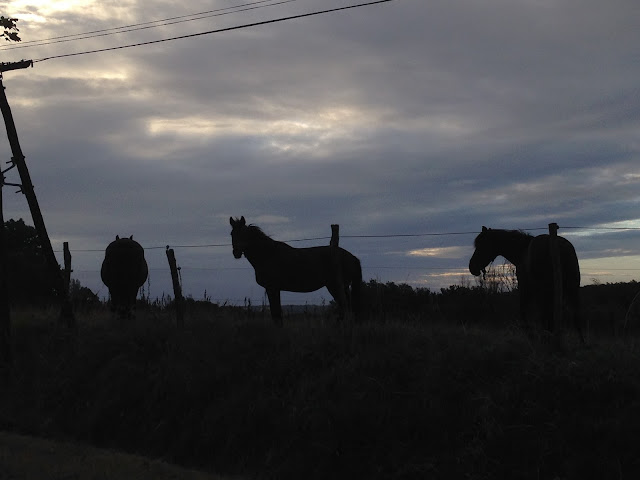 Three horses wander over to the side of the field in the pre-dawn light. Bob has been sniffing something malodorous in the drainage ditch and nearly jumps out of his skin when he sees them looming over him. Sophie stands behind my legs ready to intervene if she has to. 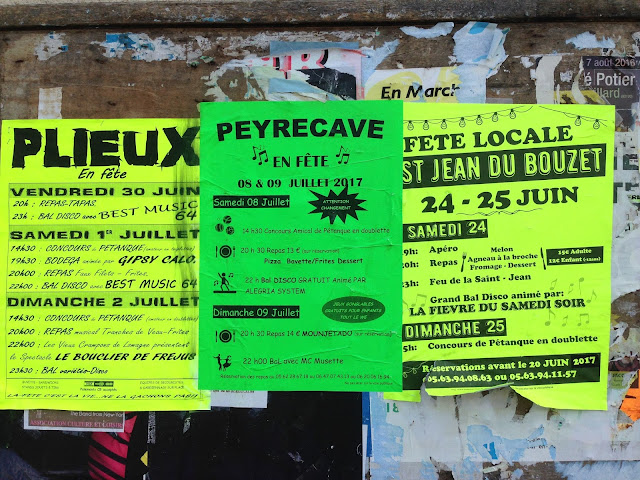 The political posters gone from the municipal notice board  - replaced by adverts for summer fetes in neighbouring villages. Village fetes always involve a petanque competition and a dinner. The menus are of the steak and chips / veal chop and chips / lamb and chips variety. There is without fail a 'Grand Bal Disco ' after the dinner with music supplied by a local DJ. 'The Fever of Saturday Night' run by Wally the depressive physiotherapist has had a monopoly position but now ( possibly because he hasn't changed his repertoire of songs since 2014 ) he faces competition from two newcomers. The newcomers are gentleman in their mid-50's who smile and demonstrate a zest for life that is alien to Wally's rather more disinterested stage persona. They also have rotating glitter balls that provide an alluring hint of Studio 54 and big city life.

What a lively part of the world your little corner of France Profonde is, Angus - so many fêtes to choose from.
Does the dead vole count as part of Sophie's calorie allowance?

There are simailarities ie they're easily cooked and washed down with copious amounts of alcohol.

A fete a week until the end of October.

Interesting that Sophie feels the need to show off her catch to you before swallowing it.

The fêtes in Aude have better menus. We recently went to one with a couple of wild boar roasted on a spit, followed by a small deer (chevreuil). Otherwise, they tend toward cassoulet and paella.
As for the disco, certain songs are musts: "Les Champes Elysée," "Born to Be Alive," "Nuit de Folie," anything by Patrick Sébastien. "Les Lacs du Connemara" by Sardou is THE song to end with. I assume you know it.

Similar events happening weekly in our town, but there is a "free movie on the green" instead of a disco ball and dancing.

Sophie's vole experience reminds me of a story and photo this past week of a Missouri fisherman that reeled in a bass and was shocked to find a deceased mole inside its mouth -- I hope a similar thing doesn't happen when you look inside Sophie's mouth.

On that note, enjoy your Sunday!

We were thinking our 15 degree mid winter day was rather toasty and opening doors and windows, and removing layers of clothes.

Good on you sophie - we hope your vole was tasty.

I did a term paper on human over-population in 1961. At that time earth had reached maximum sustainability. Isn't it sad that the church and world leaders don't talk about the destruction caused by too many people. Even China has lifted it's ban.

I once met the man who was the person behind Studio 54. What I remember about him is that he was very short.
If rotating glitter balls are now a thing in France Profonde, can we look forward to a picture of Angus in a white suit, with vest, dancing a la Travolta?