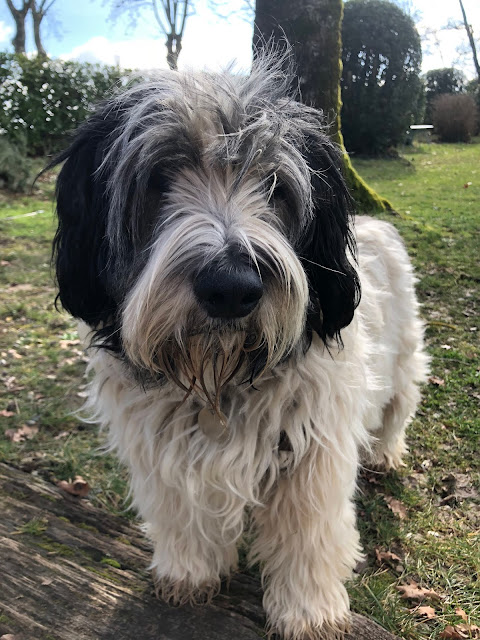 Morning walk time. Bob sees a cat. Sophie is too busy looking for something to eat in the drainage ditch to notice . Bob disappears. Sophie saunters happily along by my side. You'd think she might miss her brother. Not a bit of it. 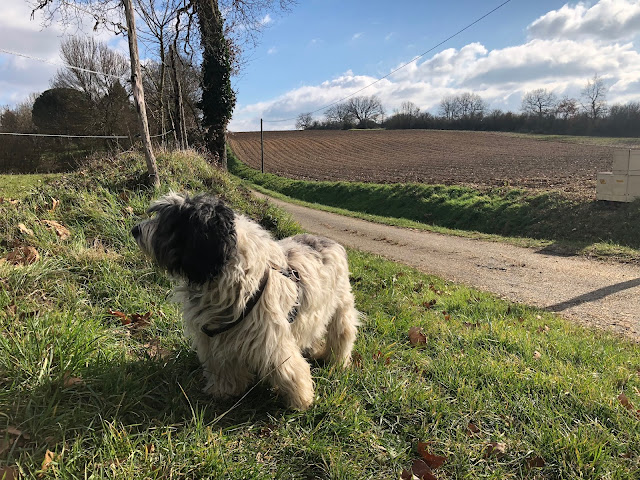 The weather dry again. We sit on the storm drain and put the world to rights. I tell Sophie that Jared Kushner has expressed surprise that only one Democrat Senator supported a negotiated settlement to the shutdown. Sophie sits in silence. She is much more interested in the story about Wilbur Ross and his slippers. Bob rejoins us. He's looking pleased with himself. 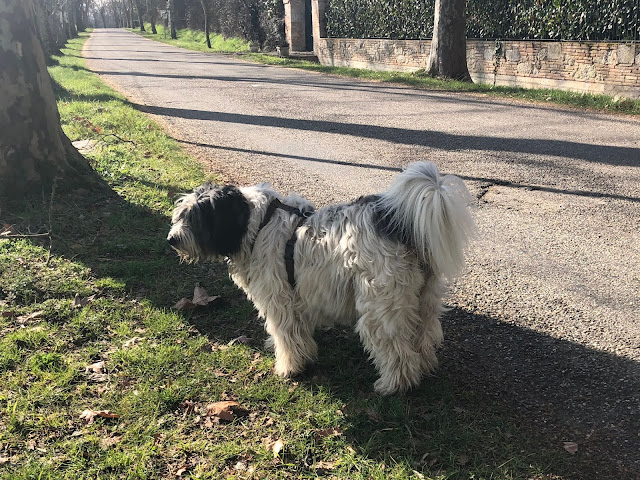 Two retired farmers in Peugeot vans pass and wave. So does the man in the large  green metallic Toyota Land Cruiser with the manic Westie. True to furious form the Westie hurls itself from the passenger seat into the back of the car. It can be seen standing against the rear window barking as they disappear down the hill. The young garagiste rushes by in the souped up little Citroen. 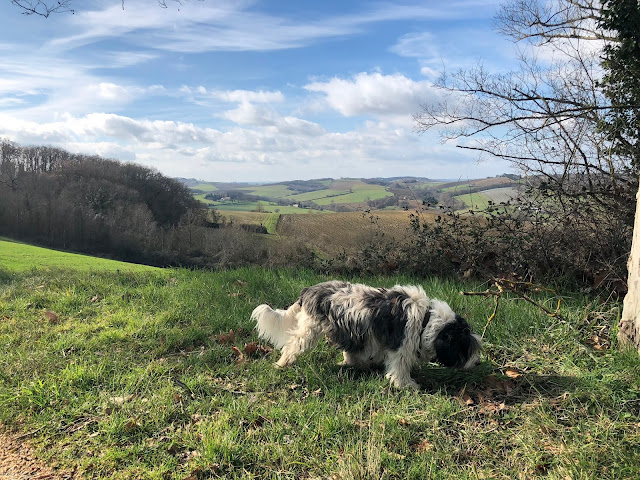 The ladies of the Women's Cooperative call to say they have a problem. A speeding van has driven along the road and they've steered onto the grass verge to avoid it. Their rear wheels are stuck. Angus is dispatched to see if he can help. '' Good morning ladies " he says cheerfully only to be met in silence. Some matting under the tyres provides traction. A heavy foot on the accelerator and the car is freed. No thanks is forthcoming. Angus can now add extracting cars from mud to the list of skills the Women's Cooperative consider him useful for. Talking to priapic llamas being the other. '' Everyone has a purpose in life " says 'The Font'  before adding delphically '' You apparently have two ". 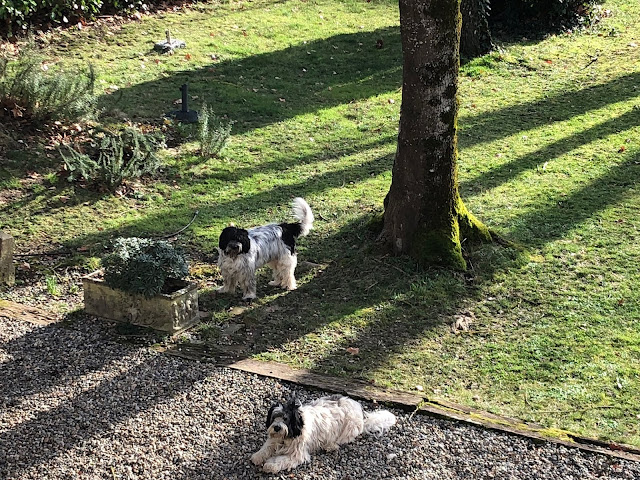 Off to google Wilbur Ross and his slippers...

Thank you for the link concerning grain-free dog food. It's a little concerning, as Cherry has been on a grain-free diet most of her life, and she does have a heart problem, so I will talk with her vet the next time we go. Cherry almost died of food allergies when she was about a year old and was put on a hypo-allergenic prescription diet at that time. It's hard to believe it is healthy - the first ingredient listed is corn starch - but it has kept her going. I think she still has the allergy problem, based on what happens when she steal food she's not supposed to eat, and we've been told the heart problem results from a genetic defect, so maybe there's no problem, but it's a probably a good idea to revisit the issues as nine years have passed. Cherry also has gall bladder and thyroid issues, as well as a chronic bladder infection. She is very well-loved by her vet and the vet's accountant. Personally, I wish that she shared Bob and Sophie's interest in American politics.

We were always told to watch out for PONs and grains. These two are on a grain free diet whih has cut back massively on allergies. They also eat three or four carrots a day as treats which also helps.

When I discovered your blog, I was so charmed that I actually read through the entire archives. Worthy of a book. However, I do not recall priapic llamas, either because the incident was described with your typical spare brushstrokes or because it was bookended by other details that made me laugh out loud. Or something so sad (the mayor's wife? the OF's grieving? the caring Cost Centre?) that I was teared up. Anyway, would appreciate a link to this other outstanding moment of yours with the Women's Cooperative.

The French seem an odd bunch in their lack of enthusiasm and gratitude. I can't imagine people being ungrateful here.

I wonder what Bob would do if he ever caught the cat? Or is all the fun in the chase alone?

Because Goldens have been named as being predisposed to having DCM and its connection to grain-free diets, I've been reading a lot about this issue. And honestly, I don't know what to think, or really do. Our dogs have been on a grain-free or limited ingredient diet for more than 10 years. And if any of them have had DCM, it was unknown to me. And you know, we've had a lot of dogs. I do think that the amount split peas/lentils/legumes or even starch in a kibble may be a culprit. And a few of the articles I've read, have suggested that they not be listed among the first 5 ingredients. But I am not for a minute a supporter of the cheap grocery store dog food that is full of corn, flour and sugar. So, I am going to watch and see how this all plays out. And in the meantime, I have tweaked the dog's secondary diet, just in case.

I shall dig out the previous references. In a nutshell :

The Womens Cooperative are into handloom weaving in a big way. They sit in a circle, chant, smoke Ganja and peddle their looms. The raw material for their organic knitwear is supplied by a herd of llamas. These are all female with the exception of one doughty gentleman called Ellio. Ellio was a bad tempered individual who alternated between extreme sullenness and extreme priapic enthusiasm depending on his hormonal state and the mood of the females in his flock. He would steadfastly ignore the members of the Womens Cooperative and eat the rose borders. He had a tendency to spit. From time to time Angus would be sent to herd him away from the roses and into his enclosure. Ellio and Angus established a rapport and Angus became something of an accomplished llama whisperer. Finally, poor old Ennio was overwhelmed by being the only male in the flock and collapsed stone cold dead while in the middle of 'romancing' one of the female llamas. He has been laid to rest in the garden and the lady with the buzz cut has laid a patio over his final resting place. There was a long and convoluted story around a fork lift truck to shift the body and the excavation of a hole large enough for a full grown male llama

I fear the Womens Cooperative and Angus have a fraught relationship that Angus can do nothing to improve.

Agree with you that it's better than a sugar and corn based alternative.

As for cats you can rest assured that no self respecting felinE is going to be cornered by an unstealthy PON.

Good grief...how could I have missed the llama story? And fraught relationship or not, a little appreciation from the ladies would have been nice. My vet has told me for years that unless a dog shows signs of an allergy then feeding them grain free is a lotta baloney and a clever marketing ploy. Who can you believe these days? I dunno, so confusing.

Wow, what a picture I have in my head!

What individual characters the PONs have and there is no end to their curiosity. Sophie however doesn't seem to display the same interest in world affairs as Bob.
Stephanie Jo in Northern California

I am ashamed. I read this--I know because I commented on that post! But how did you paint such an intricate picture of your world, like a Brueghel (with a zillion things going on, many of them bizarre), such that two years later I didn't latch onto priapic llama? No, it just was another crazy detail amongst many others.
That, or this is a sign of early onset Alzheimer's.
We also have llamas in the environs (is it a thing here in France profonde?). I steer clear. No weaving, however, in these parts. The pot (and other stups) the realm of youths in fast cars who think they're hiding by the cemetery.
I am impressed that your tiny village--or the broken-off part of your village--is so socially open. Bravo. We have nothing that can compare with ganga-smoking/growing feminists doing weaving and concrete laying with llamas.