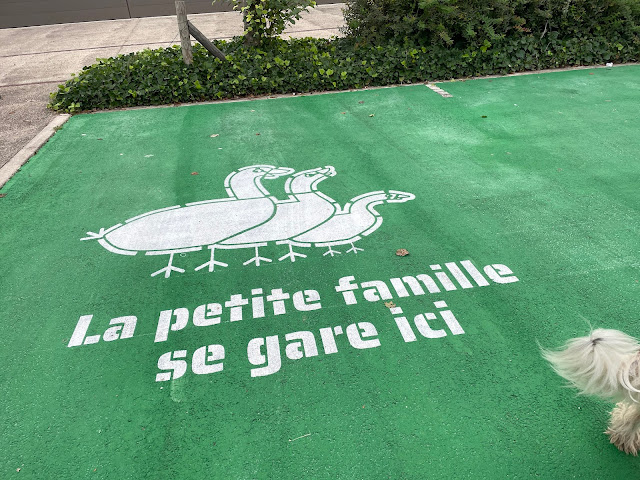 A walk across the car park to the greengrocers. New  - rather stylish - parking spots for families have been installed. Sophie stops to briefly see what the strange white markings are. The radio tells us there may be a gas shortage this winter but not to worry as prices are frozen until May ( this not surprisingly is a month after the Presidential elections ). The Russian ambassador is also on the radio saying that the 'gas problem' could soon be resolved if the EU adopted a 'friendlier' tone with Russia. Hmmmm. 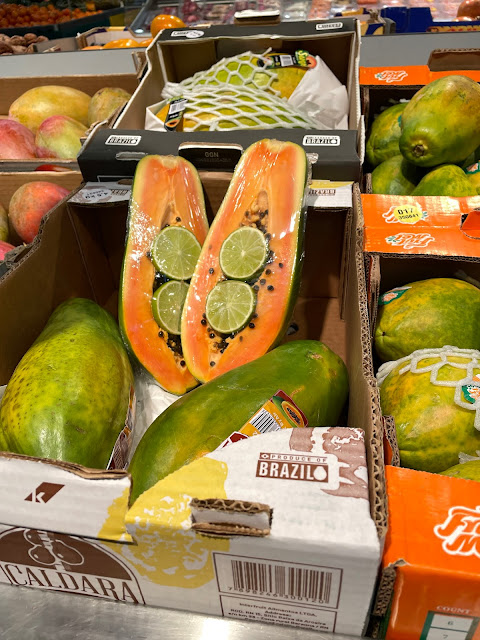 Papayas make an appearance. One has been sliced in two and each half tightly wrapped in cellophane. Is this to show the locals what a papaya looks like inside ? Or is one papaya sacrificed for potential customers who might not want a whole one ? More probably one has been bruised and they want to sell it quickly.  The two slices of lime are an exotic addition.
French retailing is an art. Grapes are laid out on beds of straw. No  plastic cartons here. Seedless grapes are also something that the French seem not to care for. 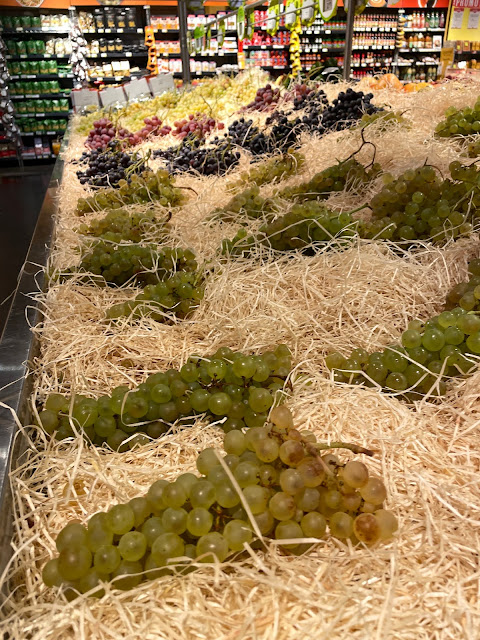 The weather warmer than last week. Sophie looks vaguely ( the emphasis being on vaguely ) like a PON. Experience and observation prove that humidity is the trigger for bad hair days. 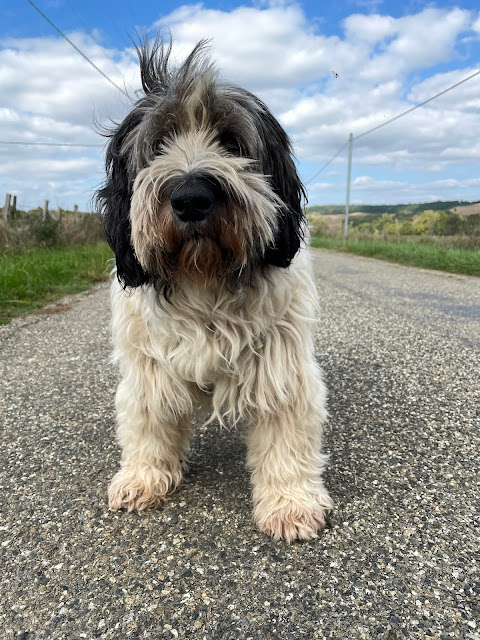 We are observed from the courtyard wall. C-A-T watches Sophie follow me round the garden. Sophie remains happily ignorant of this visitors presence. 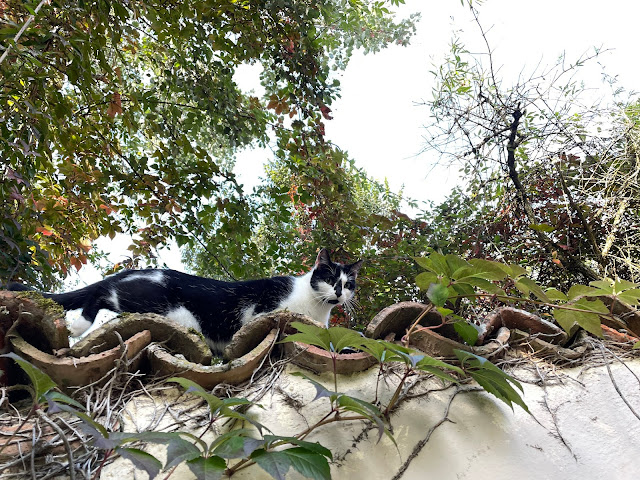 This video of the Japanese puffer fish is simply  amazing  :https://twitter.com/ErikSolheim/status/1446711522554626055
Another hotel re-opens. This one close to the Wee House :https://marineandlawn.com/rusacksstandrews/
Posted by Angus at 6:25 AM

That puffer fish video. Just WOW! One does hope the lady puffers are suitably impressed.

Even living here in the land of the fugu, I had no idea they had such artistic talents, nor did my husband. Perhaps they don't publicize it in Japan lest people start feeling guilty about eating them? It is interesting to know that seedless grapes have not taken hold in France. In Japan, everything is seedless these days, even the very traditional domestic varieties. This is disappointing to our parrot, who favors grapes with seeds. Japanese people do still peel their grapes before eating, so some traditions remain intact. I am starting to develop a theory that Sophie is actually aware of the C-A-T but is trying to remain cool.

We have the choice of seeded or seedless grapes here, but they come packaged in plastic - as does almost everything else. A start has been made with unwrapped vegetables, and some fruits, which we all tend to put into a plastic bag! I often buy half a pineapple, tightly wrapped in cling film, but need to eat it within a day or two - it tends to turn over-ripe very quickly. Each week I can fill a sizeable bin bag for recycling, with my plastic containers and wrappings - goodness knows how much a family of four or more must collect.
C-A-T looks far too healthy to be a stray or feral, so it probably just prefers your garden, and the fun it has when Sophie gives chase in the wrong direction!

A new law takes effect next year forbidding plastic packaging for a long list of fruits and vegetables. The idea is to eliminate plastic. Good idea. Re buying pineapple, I learned while living next to a pineapple plantation in Africa that the way to tell a pineapple is ripe is to smell it (not possible if in plastic). The leaf test is useless.
The parking space is also a good idea, but good luck with that. My glare was not enough to dissuade a young couple who pulled into the handicap spot this morning and hopped out. No handicap sticker. Just a very big SUV. Usually they simply park over two spaces.
The gas thing in Europe is about natural gas coming from Russia via the Nord Stream pipeline and Putin wanting to wreak havoc, not just for France but for all of the EU. No trouble expected for petrol for cars.

We're of the view that Sophie only chooses to be aware of C-A-T-S in the small hours of the morning.

The parking over two spots is a thing here too.

C-A-T seems to be enjoying a protein rich diet based on the movement of the field mice from the fields into The Rickety Old Farmhouse.

She who must be admired, never has a bad hair day, such a pretty doggie

The cat has adopted you as her people. Fascinating piece about the puffer fish. Happy Thanksgiving.