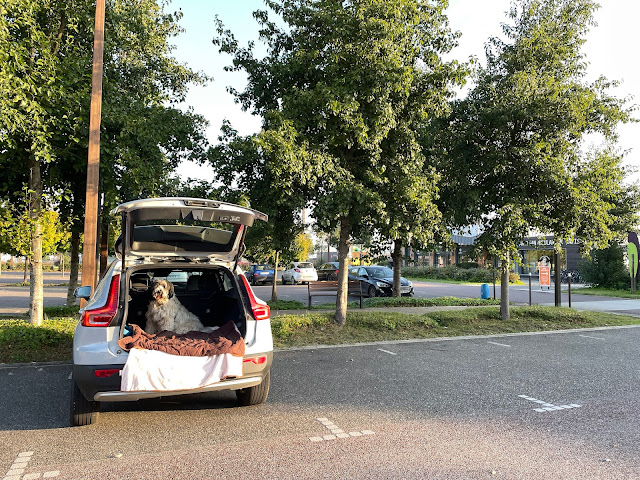 While we wait for 'The Font' to surface, Angus and Sophie take the opportunity to head off to the greengrocers. We'll be the first there. A routine we've adhered to since the start of the pandemic. On the way we stop off at the 'trendy' bakers. It's full of office workers enjoying a coffee and a croissant before their day starts. Dog and master share their croissant in the back of the car. Afterwards we have a brief tour of the car park. 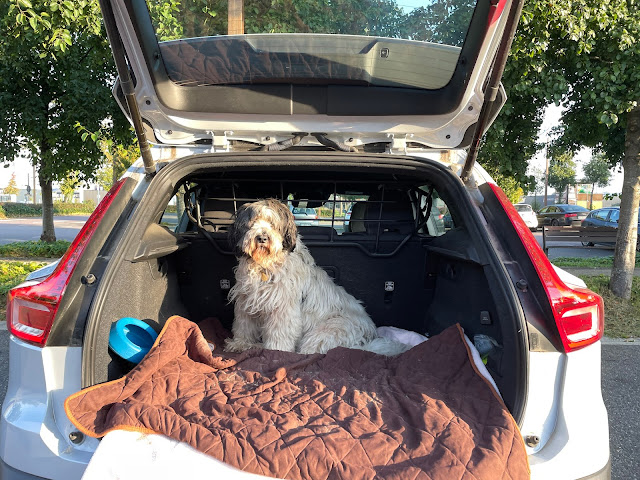 The greengrocer has a new line in nuts and soft fruit. These are dispensed in plastic containers in three types - Sportif, Gourmand and Canadien. From a brief perusal of the contents all three seem to be identical. Angus wonders what would happen if you went into a store in Toronto and asked for a 'Canadian' fruit and nut mix. 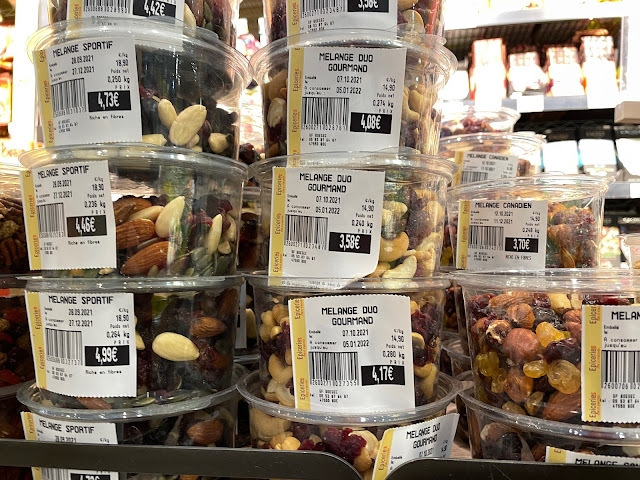 Sophie has pretty much  given up on all sorts of treats other than carrots. Amazingly she adores carrots. Angus has to think that he'd get mighty bored of carrots after a week. Sophie loves them and they are much better for her than the commercial treats which have truly alarming ingredients. 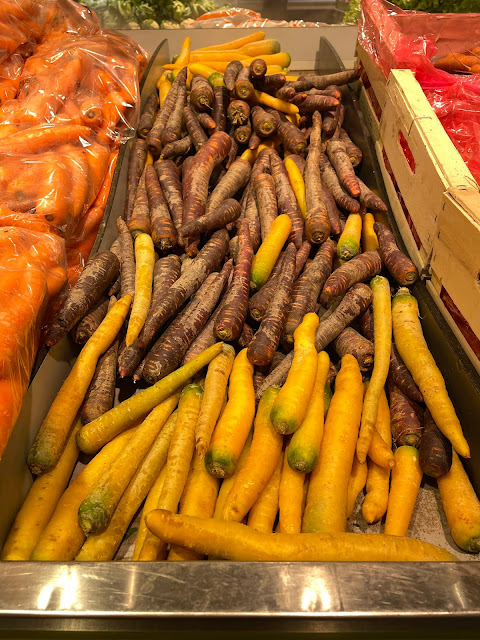 In the greengrocers a tray of what look like green dried pea pods. They're sandwiched in between all sorts of fiery looking things. There's no one around to ask so they are left well alone. 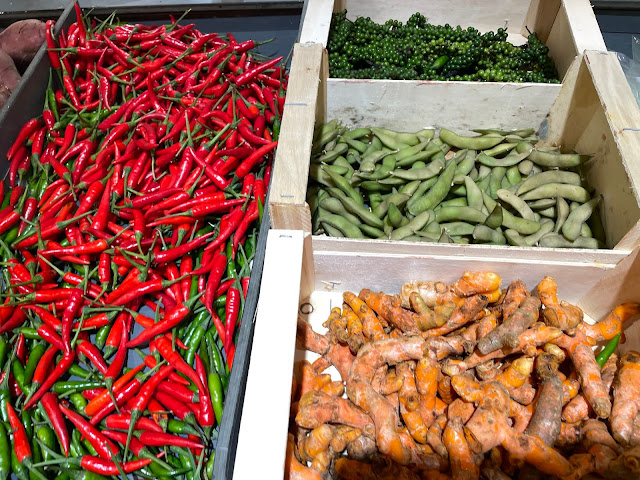 Culturally this is wonderful although I'm left wondering why the young lady to the right of the screen is so alarmed at the 0:24 mark :https://www.youtube.com/watch?v=SQORt5Y7Eqo
Cheetahs :https://www.samara.co.za/experience/cheetah-tracking-foot/
Posted by Angus at 6:44 AM

Hazelnuts seem to feature more prominently in the 'Canadian ' mix. Are hazelnuts a particularly Canadian thing? If so, I was not aware of it. Cheers, Gail.

I believe the pea pods are soybeans - they are eaten in Japan as edamame, a bar snack, boiled and salted in the shell, actually pretty addictive. I think I've even seen them when you've posted the Japanese delicacies sold at your Picard. The concert video from North Korea was indeed amazing - it's so hard to get a sense of North Korea, and it strikes me this video is more revealing than almost anything else I've seen. Carrots must be a thing with PONs, as Cherry also adored them. She liked almost all vegetables, other than the dread celery, but carrots were in their own category of deliciousness. Charlie wants nothing to do with vegetables. His favored snack is freeze-dried lamb puffs from New Zealand - they are 100% meat, so better than most, but they crumble and the concept of lamb dust is difficult for me.

When I cook chicken with vegetables for my Lily, she will eat the peas, corn, beans, sweet potato, but she carefully picks out all the diced carrot and leaves it on the floor.

We re-homed Inca as a five year old retired breeding Lab. When she first came to us, as I've done with all my dogs, I gave her raw veg as treats - she was fine with most, and although she'd always accept carrots she'd quickly spit them out. I mentioned this to the vet, who had a good look in her mouth and noticed that her bottom teeth were ground down to the gums. She had nothing to chew with. This was obviously something that happened at the breeding kennels, but she loves all cooked veg - and carrots seem to be among her favourites.
Looking closely there seem to be more skinned and unskinned almonds in the Sportif mix, and raisins and cashew nuts in the Gourmand. Such exotic choices - but what are the yellow jelly looking things in the Canaden?

Good morning! The yellow jelly looking things are golden raisins. They are sweeter and fruitier than regular raisins. When I eat raisins, which isn't very often, I prefer the golden ones. https://www.epicurious.com/expert-advice/why-are-golden-raisins-better-than-regular-raisins-article

The slender red chillies look hot, one of those seeded and chopped will spice up a soup or stew, one of those would make Sophie very unhappy.

Our Sophie pulls her own carrots from the garden.